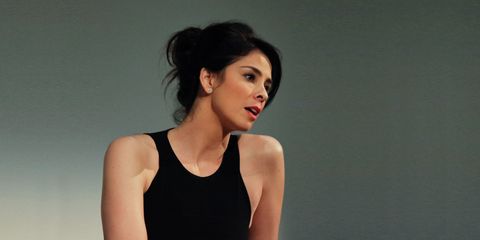 Sarah Silverman is, as a world-famous comedian, no stranger to laughter. But in a new interview with Glamour, she reveals that she's had her fair share of darkness, too. Her story is honest, raw, and important.

Silverman's depression started when she was 13, and was followed by full-blown panic attacks soon after. "People use 'panic attack' very casually out here in Los Angeles, but I don't think most of them really know what it is," she says. "Every breath is labored. You are dying. You are going to die. It's terrifying. And then when the attack is over, the depression is still there."

She went to several therapists; one hanged himself, another overmedicated her, and a third took her off medications and helped her feel "like myself again." She got worse after college, while she was on staff at Saturday Night Live, and was given a prescription for Klonopin, which prevents panic attacks. "I eventually weaned off Klonopin, but to this day I have a bottle of seven pills in my backpack that I never touch because just knowing that they're there is all I need."

Nowadays, she's on a small dose of Zoloft and seeks out regular therapy. And she never loses her focus. "I've learned that keeping busy is a good thing for me," she writes. "Like my mom always said, you just have to be brave enough to exist through it."

Silverman stars in the new indie drama I Smile Back, out October 23, in which she plays a woman with a seemingly perfect life who secretly struggles with mental illness. It's another way for the star to shine a light on depression—and the fact that it can get better. "The tough times, the days when you're just a ball on the floor—they'll pass," she says. "You're playing the long game, and life is totally worth it."