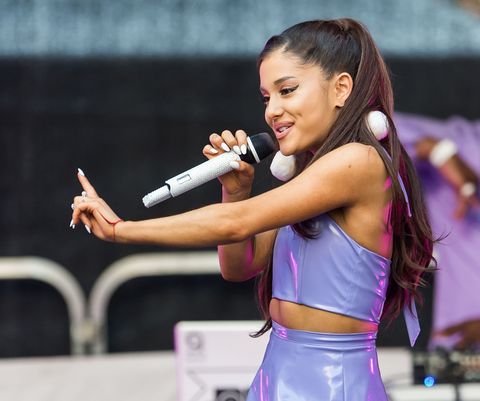 Ariana Grande just shut down a sexist interview in the most cool, calm, and collected way possible. While promoting her new single "Focus" on Power 106, the songstress was asked to hypothetically choose between giving up makeup or her cell phone. Pretty deep stuff.

Grande didn't hesitate to point out how sexist the question was, saying "Is this what you think girls have trouble choosing between?" Sadly, the men interviewing her didn't take the hint and proceeded to categorize the sacred unicorn emoji as girls-only. "Many boys use the unicorn emoji," Grande said. "You need a little brushing up on equality over here, this one. Who says the unicorn emoji isn't for men? Come on."

She ended the interview by quipping "I don't want to hang out at Power 106 anymore," which we believe qualifies as shutting it down.

In other news, Grande completed her string of feminist good deeds by defending herself against a fan who compared her body to that of Modern Family's Ariel Winter. (Winter later regrammed the message, writing "I believe in EMPOWERING other women and not putting them down. I celebrate everyone for who they are because that is what makes them beautiful. You ARE beautiful.")

here we go again.... I'm sure I'm not the only one feeling this way today!! in case you need a reminder, you're beautiful 🌬✨ it's a beautiful day to be yourself !!😌😚

Watch Ariana's full interview with the unicorn dudes below (it gets good at around 1:16).