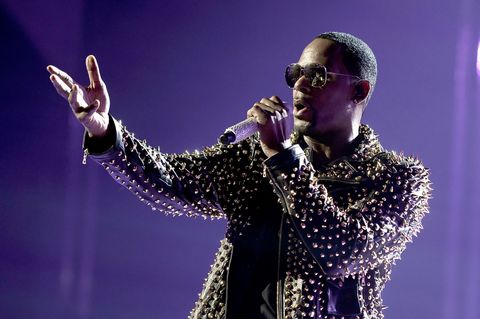 R. Kelly recently made headlines for storming out of an interview after a reporter mentioned the sexual abuse allegations against him, but the "Trapped in the Closet" rapper is finally opening up.

To recap, Kelly settled a 1996 lawsuit with a woman who claimed she'd had sex with him at the age of 15. He was then indicted for making child pornography in 2002 after a video surfaced of someone who looked a lot like him engaging in sexual acts with a minor. Six years later, the case went to trial and he was found not guilty.

Haters aside, when Kelly was asked point-blank about being in the video, he refused to comment: "Because of my lawyers, to this day I cannot have those kind of conversations." He did, however, open up the sexual abuse he faced from a female relative when he was a child, saying he thinks the problem is a generational curse (ironic, given that he denies being a perpetrator of sexual abuse).

"I looked at it as if there was a sort of like, I don't know, a generational curse, so to speak, going down through the family. Not just started with her doing that to me," Kelly said. "Generational curse doesn't mean that the curse can't be broken. Just like having no father, that's a generational curse. Which is why, when my kids were born, I was Bill Cosby in the house. You know, the good one. You know, let's be clear there: how we saw Bill Cosby when we were coming up."

It takes a self-assured man to compare himself to Bill Cosby while simultaneously denying sexual abuse allegations, but if we've taken away anything from this interview, it's that R. Kelly is nothing if not confident in his innocence.