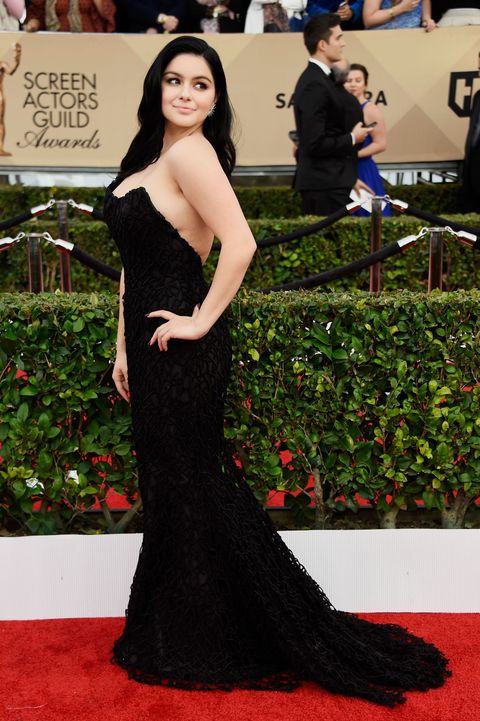 Ariel Winter had breast reduction surgery last year, reducing her cup size from a 32F to a 34D in the process. The star had no shame in her game (and why should she?), proudly showing off her surgical scars in a Romona Keveža dress at the SAG Awards. She even tweeted about it after the ceremony.

Guys there is a reason I didn't make an effort to cover up my scars! They are part of me and I'm not ashamed of them at all. :)

It's pretty clear that Ariel's scars are no big deal to her, and therefore should be no big deal to everyone else—but, as we all know, Twitter can be kind of a bummer. In fact, the Modern Family actress has dealt with so much speculation about her breasts (seriously, what is wrong with everyone) that she penned an essay to once again explain her decision.

"Women are already over-sexualized, and I grew into my body so young. I was 13, 14 years old, and I looked 19," she writes. "Suddenly, people didn't want to talk about my job—they just wanted to talk about my cleavage. I'd go to awards shows and the next day see everyone on the Internet telling me I shouldn't look like this and dress like that. The conversation became about my looks instead of my talent and work–everything that I didn't want. I even started getting messages from older male fans, and let's just say they were gross."

Uncool objectification aside, Ariel got surgery for one simple reason: she wanted to. "It wasn't because of the mean comments online," she explains. "It wasn't because I didn't like how I looked. Having so much weight on my frame was affecting me psychologically. I was uncomfortable and unhappy. I chose surgery because of how I felt, not because of what anyone else thought."

Ideally, Ariel's explanation will educate the confused among us who think they have the right to judge another person's body. Even more ideally, society will reach the point where a woman can reduce her cup size without having to explain herself.

Mehera Bonner Contributor Mehera Bonner is a news writer who focuses on celebrities and royals.
This content is created and maintained by a third party, and imported onto this page to help users provide their email addresses. You may be able to find more information about this and similar content at piano.io
Advertisement - Continue Reading Below
More From Celebrity
Gabrielle Union Debuted a New, Short Haircut
J.Lo Made Out With Ben on IG for Her 52nd Birthday
Advertisement - Continue Reading Below
Harry Is Putting the Queen in a Difficult Position
Are Will & Kate Sending a Message to Harry & Meg?
Harry and Meghan Reportedly Have a Four-Book Deal
Naomi Osaka Lit the Olympic Cauldron in Tokyo
John Legend Performed "Imagine" for the Olympics
Simone Biles Is Honored With Her Own GOAT Emoji
Kate Winslet Reveals Her Favorite Red Carpet Look
Margot Robbie Had a Life-Size Cutout of John Cena