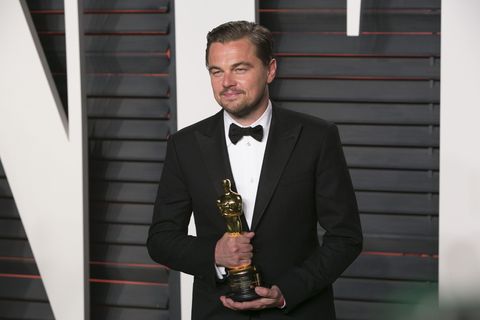 You watching a waiter pass by with what looks like your order vs. Leonardo DiCaprio waiting for the engraver lady to finish etching his long-overdue Oscar: The situations are different, but the faces and the feels are much the same.

In a video captured at the Governors Ball after-party Sunday evening, Mr. Climate Change can barely hide his anticipation as his name is finally added to the culmination of his life's work. He drums his fingers. He jokes "Do you do this every year? I wouldn't know." (Been waiting to use that one, haven't you?) He shuffles around and basically does everything short of hopping over the bar and scratching LEONARDO KING OF THE WORLD DICAPRIO onto the statuette himself.

.@LeoDiCaprio gets his Oscar engraved at the Governors Ball: "Do you do this every year? I wouldn't know." #Oscarshttps://t.co/3dBRsS1FQ4

Who can fault him though?