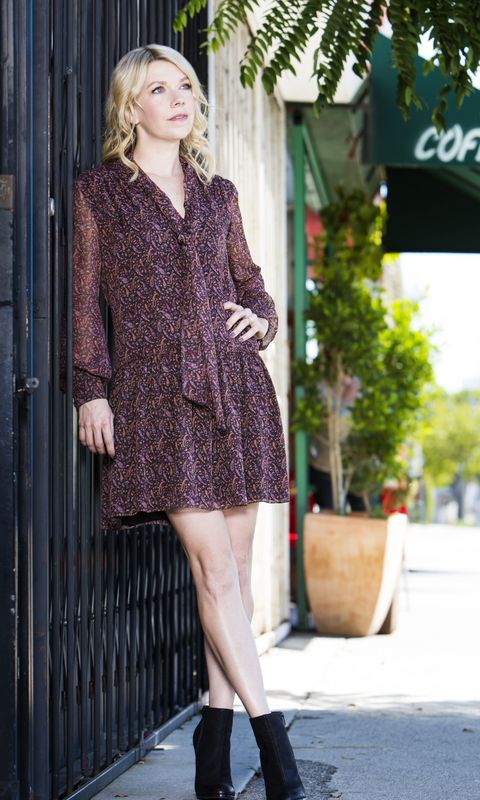 In a world where most television shows barely make it through pilot season, nabbing a part on It's Always Sunny in Philadelphia is a win. But after spending 10 years playing The Waitress on FX's cult comedy, Mary Elizabeth Ellis is taking on the role of Debbie Sanderson in FOX's surprisingly offbeat new show, The Grinder.

Playing "the mom" in a sitcom often means chilling in a kitchen and livin' that Nuclear Family life, but—in part thanks to Mary Elizabeth—this couldn't be further from the truth on The Grinder. We chatted to the star about her refreshingly feminist take on the sitcom mom, plus what it's like working on one of the funniest meta-comedies on TV. (Cough, watch The Grinder it rules, cough.)

Marie Claire: What I find so interesting about The Grinder is it has a super subversive vibe, but it's on a huge network. And while audiences weren't necessarily ready for the edginess of Arrested Development, The Grinder strikes a perhaps better balance of being quirky yet still relatable to a mainstream viewer. Did that attract you to the show at all?

Mary Elizabeth Ellis: Definitely. I've been doing It's Aways Sunny for 12 years, and so I have this cable sensibility. When I read the Grinder script, I was like "this is edgy," which is great, but in a different way from Arrested Development. I feel like the characters are a little more relatable, so maybe that's the difference.

"Just having women behind the scenes isn't enough, we also have to be aware of what we're saying about ourselves"

MC: A lot of actors and actresses think that if Hollywood evens the playing field behind the scenes, we'll see more gender diversity on screen. What's your take as someone who's been in the industry for so long?

MEE: I'm super proud of It's Always Sunny. This year, they hired three women in the room. They were very conscious of it, and wanted to make sure they had some strong female voices in there. I think having women behind the cameras is exciting—whether it's as a director or a writer or a producer—because it does feel like we're in the middle of this awakening of realizing that it's important for women to have a voice. But I also think it's still easy for us—as women, as writers and as directors and producers—to let it fall into the same patterns. Like, "and then the woman brings in the food, because the woman's the one who makes food." It's easy for that to happen, because that's what we've always known. We all have to hold each other accountable and point that behavior out to each other in a kind way. I guess what I'm saying is just having women behind the scenes isn't enough, we also have to be aware of what we're saying about ourselves.

MC: You have experience with writing—would you want to lend your talents to the show?

MEE: I don't think that I would go into the writers' room because they work really hard and I feel like I'm already working really hard to shoot my part of the show. Also, I haven't written in a writers' room before, it's kinda intimidating to walk in there. But the show creators are really generous about listening to my opinion on what my character should be doing. I have a hand in helping to figure out who she is as a whole person.

MC: In terms of the show's comedic tone, I assume the writers have to remember that they're on Fox, not FX. Meanwhile It's Always Sunny is full on edgy 100 percent of the time. What's it like working on shows with such different parameters for humor?

"A really quiet way that the show does a great job with feminism in particular is through my character."

MC: As a meta-comedy, The Grinder is acutely aware of what's going on in the industry—but there's this huge conversation happening about feminism, the wage gap, diversity, etc. How does a show that's so self-aware approach more "serious" topics in a comedic way?

MEE: In a subtle way, I think the show does a great job with feminism in particular through my character. She is a very whole person; she has a job, she's at home with the kids, she helps with the food—but it's not like she's the only person who's in charge of all those things. Fred Savage has become really aware of my feminist ideals, and he'll stand up and be like, "she doesn't need to be the one to carry the food in, I can bring the food in. She's packing lunches, I can pack lunches." It's small stuff like that, which I think is really important.

MC: I used to think the best TV shows had about 3-4 seasons where the writing remains really tight. Yet It's Always Sunny is still just as solid as ever. When do you think it will run its course, and are you happy to just keep on trucking?

MEE: It's nice to always have a job and not be floating out in the ether waiting for whatever the next big thing is. So, in that way I hope there's no a shelf-life for great shows. On the other hand, you don't want to be working on something that's reached its peak and become irrelevant. It's Always Sunny only does ten episodes a season, so they're not trying to crank out 22 episodes a year and burning out. As far as The Grinder goes, it's interesting to have the first year of something and say, "What is this? What have we learned from this?" If we do get a next season, which I really hope we do, what is that going to look like? I feel like a lot of shows get canceled before they get the opportunity to blossom and turn into the best version of themselves.

The Grinder is definitely already the best version of itself, so catch it Tuesdays at 9:30 ET on FOX.

Mehera Bonner Contributor Mehera Bonner is a news writer who focuses on celebrities and royals—follow her on Instagram.
This content is created and maintained by a third party, and imported onto this page to help users provide their email addresses. You may be able to find more information about this and similar content at piano.io
Advertisement - Continue Reading Below
More From Celebrity
Rihanna and A$AP Were Spotted on a Date
Prince Harry Is "Really Missing" Meghan Markle
Advertisement - Continue Reading Below
J.Lo and A-Rod Are "Completely Back On"
Chrissy Shared the Cutest Photo of Luna and Miles
Gaga Stuns in a Wedding Dress for 'House of Gucci'
Prince Harry Is Quarantining at Frogmore Cottage
Meghan Markle Expresses Sympathies to the Queen
Prince Harry Remembers Prince Philip
Prince William Statement on Prince Philip's Death
Meghan and Harry Are Facing Security Threats