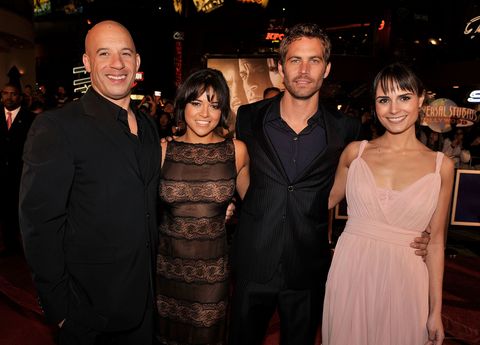 When Paul Walker died in a car accident in 2013, his entire Fast & Furious family came together to mourn their costar and friend. And it looks like his loss had a major effect on costar Michelle Rodriguez, who recently revealed that it led her to a drastic new perspective on life and death.

Rodriguez and Walker in 2009.
Getty Images

In a new documentary, Rodriguez says that she went to a pretty dark place after Walker's death. "I have to say, you know, when I lost Paul, I went through about a year of just being an animal," she said in a clip obtained by TMZ. "Like, what could I do physically to just get my mind off existentialism, get my mind off how transient life is and we just come here and can disappear any moment? I did absolutely anything I could do to hide from myself."

The documentary, called The Reality of Truth, features Rodriguez and experts talking about spirituality, meditation, and psychedelic drugs. For Rodriguez, taking the psychedelic drug Ayahuasca changed her perspective about death. "My Ayahuasca trip made me sad that he left me here," she said, laughing. "It wasn't a sadness that he's gone, it was more like a jealousy that he's there first."