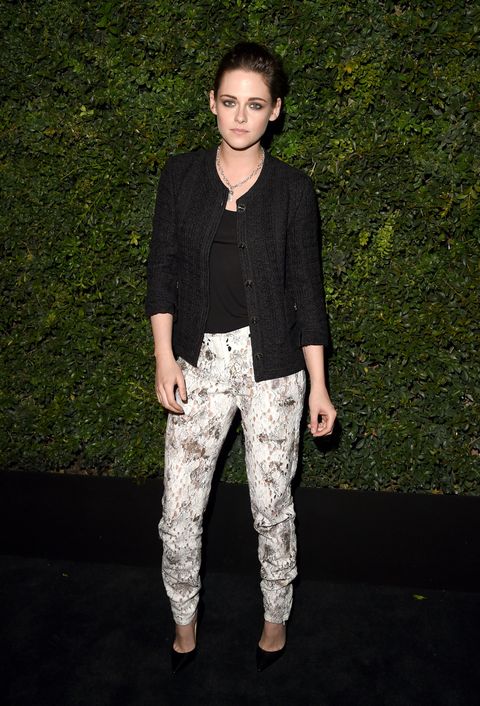 "When I was dating a guy, I would never talk about my relationships to anyone," she says. "I feel the same way now. I'm not hiding shit. And I'm very obviously...", she says before trailing off. (Stewart reportedly dated her assistant Alicia Cargile in the past, and was also linked to French singer SoKo, though reports say they've since broken up.)

But Stewart is okay with not defining anything. "There's acceptance that's become really rampant and cool," she says. "You don't have to immediately know how to define yourself."

This wasn't necessarily how she felt growing up, though. "I had to have some answer about who I was. I felt this weird responsibility, because I didn't want to seem fearful. But nothing seemed appropriate. So I was like, 'F—k, how do I define that?' I'm not going to. Plus, I didn't want to f—k with other people," she says, referring to teenagers who struggle with their sexuality. "I didn't want to be this example: It's so easy. I don't want it to seem like it was stupid for them to have a hard time."

"When I was dating a guy, I would never talk about my relationships to anyone. I feel the same way now."

She says she wants to be a proponent for the LBGT community, while avoiding using the word "gay." "I find the movement that's occurring to be so important that I want to be part of it," she says. "Me not defining it right now is the whole basis of what I'm about," she says. "If you don't get it, I don't have time for you."

Samantha Leal Senior Web Editor I'm Sam, the senior editor at MarieClaire.com.
This content is created and maintained by a third party, and imported onto this page to help users provide their email addresses. You may be able to find more information about this and similar content at piano.io
Advertisement - Continue Reading Below
More From Celebrity
Marvelous Women Scarlett Johansson & Florence Pugh
Gigi Shares Glimpse at Baby's Wardrobe
Advertisement - Continue Reading Below
Matthew McConaughey and His Son Are Twinning
Ashley Graham Opened Up About Sex After Childbirth
Brad Pitt and Nicole Poturalski Have Broken Up
Chrissy Teigen Shared a Sweet Video With Luna
EmRata Displayed Her Bump in an Open Button-Down
Harry Sent a Legal Warning Over "False" Article
Chrissy Teigen Talked About Her Baby Loss Photos
Chrissy Teigen Opens Up About Her Loss