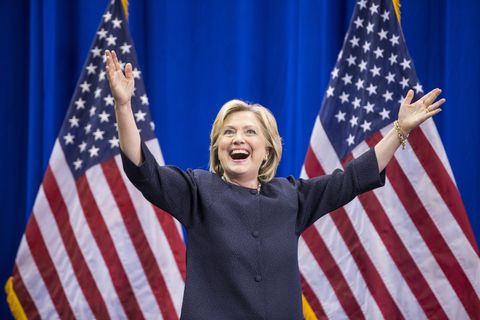 Because Hillary Clinton knows the truth about who's really running this country, she spent her recent appearance on Ellen low-key professing her love for Beyoncé, AKA Queen Bey, AKA Beysus, AKA Supreme Ruler of Our Dreams.

Hillary made not one but two references to Lemonade, telling Ellen (via a Facebook Live question from "Taylor Swift" [whether that's the real Taylor Swift or a fan account is TBD]): "I have seen parts of it, and I do like it" and "I really believe in making Lemonade out of lemons."

Sigh. It's enough to bring a tear of happiness to our eye. Of course, it'd be nicer if Hillary had watched the entirety of Lemonade, but no one is perfect. Except Beyoncé.

Speaking of music's reigning Queen, Hillary picked Bey as her vice presidential candidate during a game of "Who'd You Rather: V.P. Edition" (though she also had love for Michelle Obama, which we're so here for.)

While she was at it, Hillary threw some shade at Donald Trump, man who thinks he's a good candidate for women (LOLOLOL).

"He has been very derogatory towards all kind of women he has specifically called out women by name insulted them," she said. "He has said that equal pay isn't a real issue. He doesn't seem to think that we need to do anything to create more jobs, and raise incomes, and a lot of women are helping to support their families—or maybe they're the only support....I'm sure there is somebody somewhere that he might be good for, but I think overall there is just no evidence that he has an understanding of what women's lives are like today."

You know who does understand what women's lives are like today? Beyoncé.