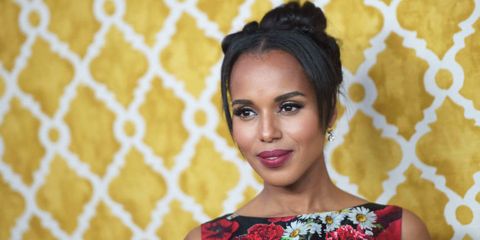 It's no secret that racism is a huge problem in Hollywood. Remember the hot mess that was last year's Academy Award nominations? But on top of women of color being passed over for roles, marginalized actresses have to deal with being stereotyped for the parts they do get.

Kerry Washington recently revealed that she was re-cast for not one, but two roles after being told she wasn't "hood" enough, which is so overtly racist our brains can barely cope.

"Before Scandal, I was actually cast in two other pilots," she told comedian Aziz Ansari during Variety Studio: Actors on Actors. "Both went to series, but I was fired and recast. For both, it was because they wanted me to sound more 'girlfriend,' more like 'hood,' more 'urban.'"

Literally no words for how appalling this is, but—depressingly—the story also rings true for Aziz, who said "you go into an audition room and you see a bunch of people that look like you and you just start feeling like, 'Oh, I'm not here [for me], I'm here because I fit what looks like the person they want in here."

The internet has a tendency to get passionate about a topic and then let it fall by the wayside, but instead of waiting until next year's inevitable Oscar fail to talk about Hollywood diversity, let's make our voices heard now. Women (and men) of color should not be dealing with this crap in 2016.