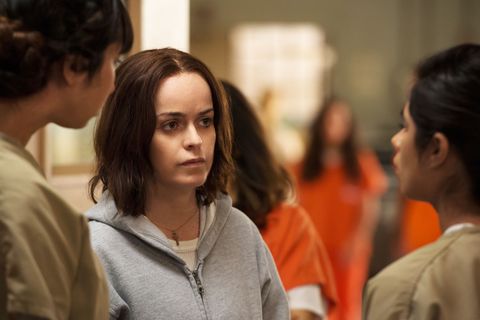 More than any other show, Orange Is the New Black is a microcosm of the most important social conversations of our time. Race, gender, sexuality—these topics are handled with care and nuance every single episode, but the way this season parses through the aftermath of rape is the ultimate example of what OITNB does so well. It challenges the viewer.

Pennsatucky was raped by Charlie "Donuts" Coates last season, a character arc Taryn Manning describes as "a can of worms I certainly wasn't prepared for." But the real shock came this season, when viewers discovered that Donuts didn't realize he'd raped Pennsatucky. His cluelessness represents the all-too-familiar narrative of rapists claiming naiveté, and poses an important question about the blurred lines of consent.

"I think everyone's threshold is different. I think it's controversial. I think forgiveness is a beautiful thing."

"No is no. When someone says no, stop," Manning tells MarieClaire.com. "That's pretty simple stuff that we learn when we're very young. With men, sometimes they can easily dismiss a female. Some men are like, 'but she led me on and that's not fair. She wanted it, or he wanted it, or they wanted it.' That's what [OITNB creator] Jenji Kohan touches on. It's very sensitive material."

Aside from the the fact that he's a rapist, Donuts is painted as a semi-sympathetic character. The viewer is challenged by the humanization of someone we spent most of last season hating, and Pennsatucky is right there with us. The thing is, she eventually forgives him and we haven't even begun to.

"I think you need to consider the world that she's living in," Manning says of her character's decision. "We're speaking about somebody that's behind bars. There's a lot of caution thrown to the wind and a lot of excuses made. If you look at the way she's brought up that gray area's not so gray. It's something perhaps she can overlook as a human, but other people can't. I think everyone's threshold is different. I think it's controversial. I think forgiveness is a beautiful thing."

Forgiveness is a beautiful thing, but nothing can change the fact that Donuts raped Pennsatucky. He. Is. A. Rapist. Viewers will likely feel uncomfortable about his character being painted as a multi-dimensional sometimes-nice-guy, but that's where Boo comes in. Like the viewer, she has no tolerance for the "maybe he just made a mistake" narrative—something that seems like a very conscious decision on the part of OITNB. Below is a condescend version of Boo's reaction to Donuts' apology, which is almost identical to our own:

Boo: "He doesn't get to constantly rape someone, and then apologize and make it go away." Pennsatucky: "I'm not saying it's gonna go away. But I am so tired of walking around feeling shitty every day." Boo: "Fine. But guess what? He gets to feel shitty for the rest of his natural life." Pennsatucky: "What if he's just like a regular person who made a mistake?" Boo: "I do not like where this is headed."

The season wraps with Pennsatucky forgiving and kissing Donuts, so it's fair to say things headed in a very controversial direction. Sure, Boo sticks it to Donuts by saying, "you didn't fuck up, you didn't make a mistake, you're a fucking rapist," but still—having a sexual assault victim fall for her rapist is sure to raise eyebrows. Manning, however, is fine with that.

"I invite the controversy, I invite the challenge to people," she said. "And at the end of the day, Pennsatucky's okay. She's alright. She survived. So, if she's okay, everyone else should be okay, really. It's the path she wants to walk down. Let her stumble through it."

We live in a world where men like Brock Turner are given three months of jail time for raping unconscious women, so yeah—watching Pennsatucky stumble through it is hard. But OITNB asks the viewer to forgive Pennsatucky's forgiveness without asking us to forgive her rapist. We are all Boo: willing to stand uncomfortably by Pennsatucky's side, but unwilling AF to give Donuts a free pass. We're forced to understand her feelings without abandoning our own—and that is the brilliance of Orange Is the New Black.

Mehera Bonner Contributor Mehera Bonner is a news writer who focuses on celebrities and royals—follow her on Instagram.
This content is created and maintained by a third party, and imported onto this page to help users provide their email addresses. You may be able to find more information about this and similar content at piano.io
Advertisement - Continue Reading Below
More From Celebrity
Iconic Party Photos From the Past
The Best TV and Movie Wedding Dresses of All Time
Advertisement - Continue Reading Below
40 Celebrity Sisters Who Look So Much Alike
40 Rare Photos of Grace Kelly Through the Years
A Look at Royal Family Portraits Through the Years
The 50 Most Popular Episodes of ‘Friends,’ Ranked