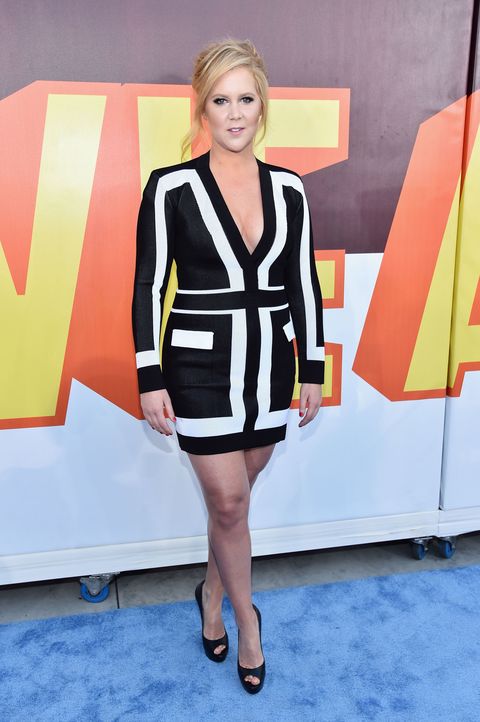 The time has come to stop everything you're doing and read Amy Schumer's new memoir. Because who needs Netflix and chill when you can curl up in bed with The Girl With the Lower Back Tattoo, right?

While the book is sure to make you LOL, Schumer opens up about some darker moments from her past—including a fight with her abusive boyfriend, whom she calls Dan.

"I thought he was the love of my life for a long time but I allowed him to hurt me in ways that I still don't understand," she writes. "Dan and I would go to happy hours and get drunk, and then he'd get mad and shove me little. Sometimes from the shove, I'd trip over something and fall, and get hurt."

When she eventually tried to run away, Dan became more violent.

"I was screaming for him to stop, when he grabbed a butcher knife from a drawer," she said. "And that's when I was sure he was going to kill me. It may sound cliche, but I saw my life flash before my eyes. It can happen to anyone. I'm a strong-ass woman, not someone most people picture when they think 'abused woman.' You're not alone if it's happening to you, and you're not exempt if it hasn't happened to you yet."

Schumer's currently in the most goal-worthy relationship ever with Ben Hanisch, who she met online after exchanging "very simple hellos and short, funny messages."

"I usually would go for narcissists who, you know, could never be happy," she recently said of their relationship. "[Ben's] just very supportive and loving and I think we're very proud of each other. He is so far removed from this business that it's really nice."

Raise a 🍷 to Amy Schumer, because she deserves all the happiness.