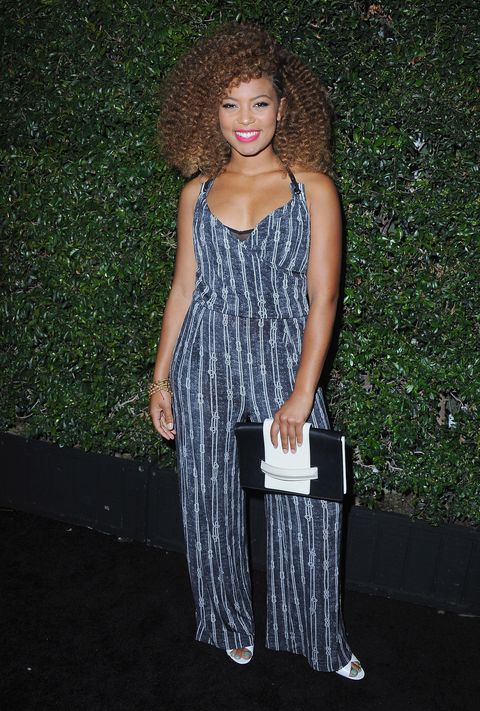 When the Bough Breaks, in theaters today, is peak guilty pleasure: sultry, dark, the kind of holy-shit-did-that-just-happen thriller that'll make you spill your popcorn.

The movie stars Jaz Sinclair as Anna, a pretty young 20-something who becomes a surrogate for a loving, successful, pretty much perfect couple (Morris Chestnut and Regina Hall). As the film, and pregnancy, progress, so does her crazy as she falls for (read: becomes completely, totally, freakishly obsessed with) the happy hubby.

But When the Bough Breaks is way more than just a Fatal Attraction-esque indulgence—and that's thanks, in part, to its star. Sinclair makes Anna more than just the over-the-top crazy lover archetype. Here, the actress on how she did it.

Marie Claire: Introduce us to Anna.

Jaz Sinclair: Anna is a 21-year-old girl who wants to help this family by being a surrogate. She starts off at the beginning of the film shy and good intentioned, and throughout the film, we uncover some of her darker stuff, her demons, because of the circumstances. I didn't judge the character when I went in. I made sure to allow her to be human. I didn't want to just put her in a "crazy" box and think that I understood her. It took me a lot of analyzing the script. I spent a ton of time reading it and asking myself honest questions, like, Why? Why this? Why now? Why after this did she decide to do this? What changed? What triggered? I talked to the director Jon Cassar and shared my ideas with him and he just loved my take on the character. He gave me so much artistic freedom. More artistic freedom than I've ever had in a project before.

MC: There's a subgenre of thrillers in which we meet this female character who's sweet, in love, the sort of good girl, and then she "goes crazy." Do you think these women are misunderstood?

JS: I do. I always knew Anna was a human. I wanted to make her a real person, a person with wounds, just like everybody else. I definitely have sympathy for Anna. She has genuine intentions and she wants to help this couple out, and she's a girl who's used to having no power. And finally she's needed and she's valued and she's appreciated and she gets a taste of this life that she's only dreamed of, and then she realizes that as soon as she has the baby, she becomes obsolete. What I love about this film is that the circumstances are so heightened—it doesn't matter how crazy it gets, the couple can't send her away. They have to endure it because their baby is inside of her body. And knowing that the closer she is to having the baby, the closer she is to becoming obsolete is part of what drives her to madness. She can't let her dream life go, because then what?

MC: Why do you think we love characters like Anna so much?

JS: It's just such a unique form of madness and obsession and desire. Just raw desire. And I think we love to see that in its most extreme form. It's sexy and it's exciting and it's all these things. But, at the root of it, it's human. And though everybody might not act the way that Anna acts, people can relate to wanting something so badly that you're willing to do anything to get it.

"It's just such a unique form of madness and obsession and desire."

MC: This is your first major starring film role—how has this experience been different for you, from the other work you've done?

JS: It's a totally different experience. I mean, from Paper Towns, doing a little bit of press on that, being, you know, one of six kids, and people just wanted to know about Cara Delevingne. Which is awesome. She's great. And then to this film, where there's more of me and it's a dark subject matter and it's sexual—I had to pull up some heavy emotions in order to do it. And me, as Jaz, I love my anonymity and I love my privacy and I love the life that I live, and that whole world kind of scares me. So I've just been taking it day-by-day and trying to keep my integrity and myself and set boundaries and figure it all out. I'm a 22 year old black female and I have this role that shows so much range—that's a dream come true, and so few people get that opportunity and I am so grateful to be in my shoes right now.

MC: Last question: Any seduction tricks we could learn from Anna?

JS: It's funny, when I got the role, that was the thing that scared me the most. I mean, I filmed when I was 20 and I am not Anna. Like, my sexuality looks nothing like Anna's does. I didn't feel like a grown woman who was versed in seduction. It just was such a new idea to me. And so, I was filming Paper Towns at the time, and I would be in my apartment, turn on music, and, like, dance in the mirror trying to figure out what my sexy looks like. I think the trick that I've discovered with seduction, shooting the film, is that, in order to seduce someone, you have to believe that you're going to succeed. If there's any hint of doubt that you're going to fail, it's not sexy. That's where the empowerment comes from, and that's what the seduction is—the you can't resist me quality.

Jen Ortiz Deputy Editor, Cosmopolitan As deputy editor, Jen oversees Cosmopolitan's daily digital editorial operations, editing and writing features, essays, news, and other content, in addition to editing the magazine's cover stories, astrology pages, and more.
This content is created and maintained by a third party, and imported onto this page to help users provide their email addresses. You may be able to find more information about this and similar content at piano.io
Advertisement - Continue Reading Below
More From Celebrity
Your Guide to the Current Royal Line of Succession
Watch Prince Harry's Interview with James Corden
Advertisement - Continue Reading Below
Meghan Has an Adorable Nickname for Harry
Harry Revealed Archie's Impressive First Word
Harry Said the Press Was Ruining His Mental Health
Here's Blue Modeling Icy Park Like a Pro
How Kate and Will Feel About the Sussex Oprah Chat
Selena Gomez Photographed Flipping Off Paparazzi
Serena Williams Stuns in a Glamorous Red Robe
Sophie Turner and Joe Jonas Took the Cutest Selfie