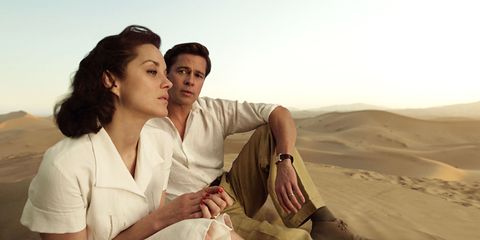 Allied has plenty of strengths (it's sandstorm sex scene, for one), but its most stunning accomplishment is in the costume design. The film takes place in World War II-era Morocco and England, which lend itself to some *seriously* beautiful clothes—all of which were created by Joanna Johnston. The Oscar-nominated designer gave MarieClaire.com an exclusive look at her sketches for the film, and chatted to us about her genius vision for Brad Pitt and Marion Cotillard's costumes.

Marie Claire: Marion Cotillard's character is first described by her purple dress, so obviously it had to be iconic. How did you come up with the design for that piece?

Joanna Johnston: "I wanted it to be sexy, but subtle—not over flashy in any way. I knew that we would see her back first, so I thought 'let's have the sexy, attention-drawing aspect be an open back.' I wanted her to be feminine, so I had the front high because I liked the juxtaposition. The fabric had a silver thread which gave it a highlight when she moved."

MC: Brad Pitt's character is told to look for a hummingbird to recognize Cotillard—how did that come about?

JJ: "I had this idea that her character could have a little cape, and we could do a painting on the inside. The painting would depict something that would lend itself to dialogue. Marion Cotillard had heard this story about about an actual spy whose nickname was Hummingbird, so we decided to do a hummingbird going into a hibiscus flower."

MC: The early part of Pitt and Cotillard's on-screen courtship took place on the roof—while they were in their nightclothes. What went into designing those scenes?

JJ: "The rooftop scenes were very evocative—you had to feel the heat. I wanted them both to look really sexy. I wanted Cotillard to be classically sexy, so she's in a silk-satin nightdress with lace. And then the robe—I wanted air to move in it—so it was very breezy. I used a very light-weight silk."

MC: So much of the movie depended on Pitt and Cotillard's chemistry—did you keep that in mind when designing, in terms of having the clothes play off each other?

JJ: "In the beginning, they're pretending to be a married couple, and their costumes do work in a pair. I'm very mindful of how costumes play together in a scene, to make sure they work in the way they're meant to work. I'm very conscious of that."

MC: How do you design an outfit when you know it's going to be ripped off during a sex scene?

JJ: "I wanted to keep their clothes very simple—and in fact they're both in pale colors. I didn't want there to be a distraction with their clothing. She had a detail of beautiful drawn thread-work on her dress, and underneath it there were layers of underwear to peel off in pale peach silk satin. The action was in the forefront of my mind in this design."

MC: When you're dealing with clothes that come off in a sex scene, do you have to make more than one piece?

JJ: "Yes, there's a lot of repetition in a lot of the outfits. The long green dress, we made eight of those. There's much more repetition that you imagine, but yes, the sandstorm scene we had repeats—they wore white, so we had to back ourselves up!"

MC: What was the item in the film that meant the most to you personally?

JJ: "Every time you create something, you have a bit of a crush on that piece. One of Brad Pitt's heavy Irish linen suits, I had a crush on the fabric. And Marion's dressing gown on the rooftop—I loved the fabric. If you ask me the same question over a ten year period, I'd answer a different way each time!"

By the way, if you're interested in seeing that sweet green outfit come to life, check out Marion Cotillard rocking it in the clip below.