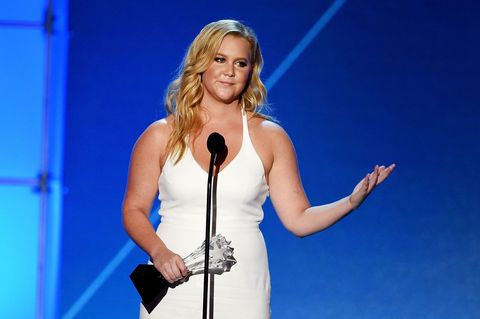 Just yesterday, news broke that Amy Schumer is set to star in Sony's upcoming live-action Barbie movie. Less than 24 hours later, the trolls are out in full force on Twitter, because of course they are.

The movie will reportedly follow Schumer's character's journey to find self-confidence and inner beauty after she's kicked out of Barbieland for not being "perfect enough." TBH, it sounds like a perfect role for Schumer, who has openly advocated for positive body image and thinking beyond traditional beauty standards.

But not everyone agrees and (sadly, predictably) the trolls are already speaking out, taking to Twitter to voice their contempt for Schumer's casting. Much of the criticism is outright body shaming, because Schumer's real human body doesn't match up with Barbie's unattainable plastic one.

Amy Schumer being Barbie is just one of those things that make you question everything you knew about the universe.

But thankfully, others are defending Schumer's casting, pointing to things like, you know, her comedic talent and proven track record in entertainment as reasons to celebrate the news.

If it's anything like #Trainwreck, fuck yeah I'm down for @amyschumer as Barbie. Especially if it's R

The ONLY way I'd watch a movie about #Barbie is if @amyschumer was starring in it.

I wonder how many dudes who are furious about Amy Schumer being cast as Barbie were planning to actually go see a Barbie movie.

Kayleigh Roberts Kayleigh Roberts is the weekend editor at Marie Claire, covering celebrity and entertainment news, from actual royals like Kate Middleton and Meghan Markle to Hollywood royalty, like Katie Holmes and Chrissy Teigen.
Advertisement - Continue Reading Below
More From Celebrity
Why Isn't Beyonce at the 2020 Grammys?
Watch Demi Lovato's Emotional Grammys Performance
Advertisement - Continue Reading Below
Beyoncé's Pre-Grammys Look
Blake and Gwen Were Too Cute at the Grammys
The Jonas Brothers' Grammys Performance Was a Lot
Alicia Keys Covers 'Someone You Loved'
Lizzo Opens the Grammys With an Epic Performance
Chrissy and John Win Best Dressed at the Grammys
Sophie Turner Stuns In a Gothic Look
Ariana Grande Is a Disney Princess at the Grammys