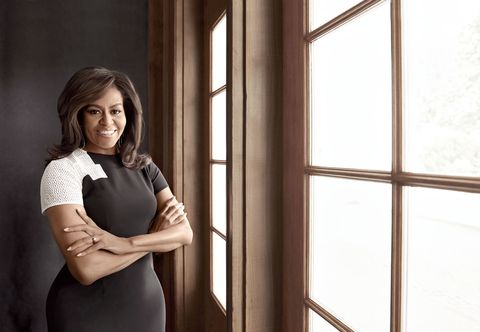 For a special message from the First Lady and LGL, watch our Young Women's Honors awards tonight at 9 p.m. EST on The CW.

Michelle Obama knows how much work it can take for a girl to get an education. Growing up in a cramped, noisy apartment on the South Side of Chicago, she often woke up at 4 a.m. to study in peace. "I can tell you, my education has been the key to everything I've been able to achieve in my life," the first lady told Marie Claire. "So for me, this issue has always been personal."

Which is why, in March 2015, she launched Let Girls Learn (LGL), a bold initiative to raise awareness about the fact that, worldwide, 98 million girls are out of school. "There are girls all over the world who are hungry to learn and who take extraordinary risks just to have a chance to fulfill their potential," Obama says. "I knew I wanted to make it my mission to help them get the education they deserve."

Nearly two years later, LGL has invested more than $1 billion in new and ongoing government programming in over 50 countries; signed on 11 nations—from the U.K. to Mexico to South Korea—with some pledging an additional $600 million; and enlisted more than 100 companies and organizations to pitch in supplies, expertise, and financial support.

Such investments are already making an impact in Pakistan, where 12-year-old Sana Sufiyan, who used to work eight-hour shifts in a shoe factory, is now learning to read and write after an LGL grantee persuaded her parents to enroll her in school; and in Malawi, where Halima Robert, who was forced to drop out of school to wed at 15, had her marriage annulled and continued her studies thanks to an LGL program that discourages child marriage.

"I carry the stories of the girls I've met with me every day," Obama says. "Their passion, intelligence, and determination are an inspiration to me, and I plan to keep speaking out on their behalf, not just for the rest of my time as first lady, but for the rest of my life."

Take action to help girls around the world get an education. Go to letgirlslearn.gov to find out how to get involved.

Kayla Webley Adler Deputy Editor Kayla Webley Adler is the Deputy Editor of ELLE magazine.
This content is created and maintained by a third party, and imported onto this page to help users provide their email addresses. You may be able to find more information about this and similar content at piano.io
Advertisement - Continue Reading Below
More From Celebrity
Olivia Wilde & Harry Styles Keep It Profesh on Set
Prince Harry on How Tabloid Attacks Changed Him
Advertisement - Continue Reading Below
Watch Orlando and Katy After Her Performance
Kate Middleton Debuted Long, Straight Hair
Prince Harry's Surprise Inauguration Appearance
Chrissy Teigen Shared a Cute Tom Hanks Story
Gigi and Zayn Finally Reveal Their Daughter's Name
Rihanna Takes Out the Trash on Trump's Last Day
Chrissy Teigen Shared a Moving Post About Sobriety
Meghan's Royal Aides to Testify in Her Court Case