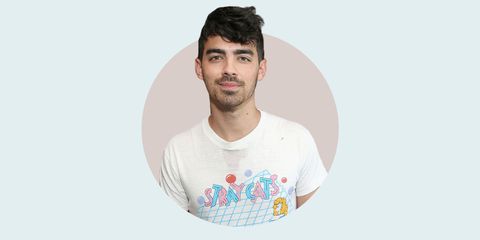 The Jonas Brothers were an A+ boy band and DNCE is legit 🔥, so when given the opportunity to chat with Joe Jonas about important topics like Donald Trump and Guess underwear, we leapt at the opportunity. More importantly, we asked Jonas about the below photo, and turns out no, he was not joking. Camp Rock 3 might actually happen—and if it does, it'll be a lot darker.

On Filming Another (R-Rated) 'Camp Rock'

"If it made sense, sure. For all of us—Demi, Nick, it would be funny to do a spin on it. Do the graduating days, make it kinda dark. An adult film. Well, not an adult film. An R-rated film. We've joked around about the idea a couple times."

On Donald Trump and Politics

"We live in a world now where, whether you voted for Trump or not, it's a crazy generation. A lot of people are vocal, and you can be selective. I think it's nice we have this platform—instead of having to go on a big show, we can say what we feel right away, and people can disagree or not. DNCE likes to have fun and take you out of that mindset a little bit, because it's a heavy world right now. So, we try to stay out of the politics side. But there are certain things we're passionate about—global warming is a big thing for us."

On Shooting Those Shirtless Guess Photos....

"You're trying to flex as much as you can, because you want to look your best. There was a lot of laughing going on. When you're shooting, you're so exposed in your underwear—but after a time you forget, so you're walking around catering in your underwear."

On Competing with Nick for Best Body

"Nick and I go to the gym together once and a while. It's really funny to see. That's where we get competitive. Nick can put up a lot of weight, he's got massive shoulders. But we don't want to look like each other. I want to be a little bit smaller, Nick is always carrying invisible suitcases around."

On Being a Sex Symbol (FYI, He Doesn't Consider Himself One)

"I don't think I'm a sex symbol. There's a little bit of an idea that you've gotta stay in the gym if you're going to be in an underwear campaign, so you have that in the back of your head. But it's a lifestyle now. It was life-changing, I had to focus on getting in great shape for this. But no, I don't think I'd consider myself a sex symbol."

Mehera Bonner Contributor Mehera Bonner is a news writer who focuses on celebrities and royals.
This content is created and maintained by a third party, and imported onto this page to help users provide their email addresses. You may be able to find more information about this and similar content at piano.io
Advertisement - Continue Reading Below
More From Celebrity
See the Royals Socialize at a 1991 Cocktail Party
Eugenie's Pics from Inside Harry and Meghan's Home
Advertisement - Continue Reading Below
Queen Trolled Tourists Who Didn't Recognize Her
Blake and Ryan Recreated Their First Date on IG
Charles Expertly Ignored Boris Johnson's Snafu
How Kitty Spencer's Wedding Dress Honored Diana
Dolly Parton On the #FreeBritney Movement
Will & Kate Are Nervous About George's Future
George Won't Be Forced to Go to Boarding School
Diana Would Have Written a Memoir Too, Friend Says