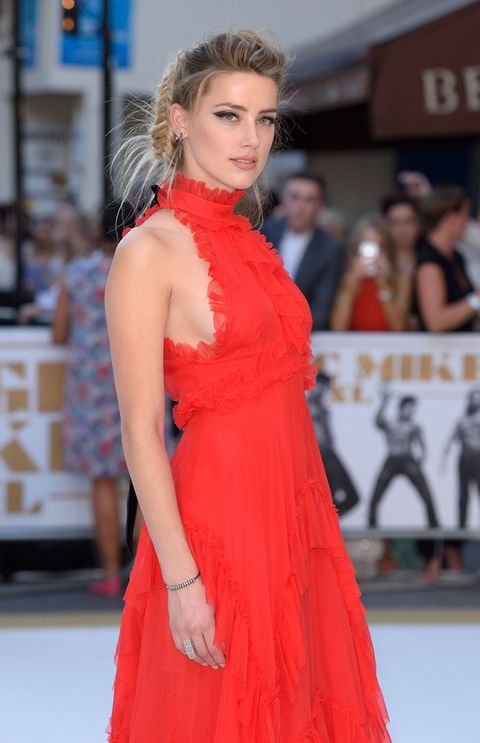 Amber Heard "officially" came out as bisexual during an interview in 2010. It felt natural and normal for her (she was "always out" with friends and family), and yet the blowback from Hollywood executives was immediate.

"I just answered honestly," she said at The Economist's Pride & Prejudice event in New York City. "I could tell by the look on this person's face it was a big deal. My poor publicist. Then I realized the gravity of what I had done and why so many people—studio execs, agents, advisors—did not want this coming before my name. I became attached to a label."

Heard was told that being labeled "bisexual" could be harmful for her career as a Hollywood "It" girl. "As a leading lady, there's a certain amount of wish fulfillment," she said. "I was asked 'How is anyone going to invest in you romantically if they think you're unavailable?' I said, 'Watch me do it.'"

Heard's career has been incredibly successful, which proves that yes, the world is ready for queer actresses. But there's still work to be done. "I stand here now amongst many of my romantic leading lady peers who are out and fluid," she said. "I'm one of many now, and I'm working...If every gay man that I know personally in Hollywood came out tomorrow, then this would be a non-issue in a month...We have a long way to go."

Mehera Bonner Contributor Mehera Bonner is a news writer who focuses on celebrities and royals.
This content is created and maintained by a third party, and imported onto this page to help users provide their email addresses. You may be able to find more information about this and similar content at piano.io
Advertisement - Continue Reading Below
More From Celebrity
Simone's Boyfriend Sent Her the Sweetest Message
What Happens on Katie's Season?
Advertisement - Continue Reading Below
Rebel Wilson Recreated This Britney Spears Look
Jennifer Lopez Flew Back From European Getaway
Jennifer Lopez Wears Old Bracelet From Ben Affleck
Simone Biles Cheers on MyKayla Skinner
See the Royals Socialize at a 1991 Cocktail Party
Eugenie Posts Pics from Harry & Meghan's Home
Queen Trolled Tourists Who Didn't Recognize Her
Blake and Ryan Recreated Their First Date on IG