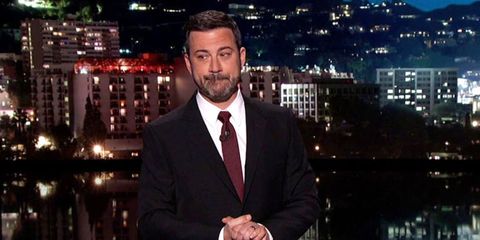 Last night, while all of Hollywood seemed to be in New York for the Met Gala, Jimmy Kimmel used his monologue to share a deeply personal story with an important political message.

Kimmel described the delivery as easy and said everything about the birth seemed normal, until it wasn't. "He appeared to be a healthy normal baby until about three hours after he was born."

Kimmel prefaced his monologue by assuring the audience that the story had a happy ending, but he was visibly shaken and emotional from the moment he started sharing the story. He went on to explain that Billy was born with congenital heart disease, which was discovered when a very attentive nurse noticed he had a heart murmur and was turning slightly purple.

As soon doctors realized Billy's heart was the issue, they sprang into action.

"It's a terrifying thing," Kimmel said. "You know, my wife is back in the recovery room, she has no idea what's going on and I'm standing in the middle of a lot of worried looking people—kind of like right now—who were trying to figure out what the problem is."

The problem was identified—Billy was born with a rare heart disease called Tetralogy of Fallot. Kimmel emotionally explained that Billy's pulmonary valve was completely blocked and there was a hole in the wall between the left and right sides of his heart. Three days later, the newborn underwent open-heart surgery.

on behalf of my family, thank you for the lovely and loving tweets about our son Billy and for your donations to https://t.co/HOIUvNt8WE XO

While Billy is doing well now, he will have to have more surgeries in the future. Kimmel used the experience as an opportunity to praise the team at Children's Hospital Los Angeles and to highlight important political issues surrounding healthcare in America—specifically the importance of protecting the ACA provision that prohibits health insurance companies from turning away people with pre-existing conditions.

He also criticized Donald Trump's proposal to cut to $6 billion from the National Institutes of Health budget and praised Congress for deciding to increase the organization's funding by $2 billion instead. The proposed cuts would have affected children and funding for children's hospitals, Kimmel said.

"If your baby is going to die and it doesn't have to, it shouldn't matter how much money you make," he said. "I think that's something that whether you're a Republican or a Democrat or something else, we all agree on that, right?"

Kayleigh Roberts Kayleigh Roberts is the weekend editor at Marie Claire, covering celebrity and entertainment news, from actual royals like Kate Middleton and Meghan Markle to Hollywood royalty, like Katie Holmes and Chrissy Teigen.
This content is created and maintained by a third party, and imported onto this page to help users provide their email addresses. You may be able to find more information about this and similar content at piano.io
Advertisement - Continue Reading Below
More From Celebrity
Matt Damon Trolled Ben Affleck and Jennifer Lopez
This Old Video of the Queen Saying "Nah" Is LOL
Advertisement - Continue Reading Below
Diana Had a Secret Message on Her Wedding Shoes
Will's Friends Made "Jibes" About Kate's Mom
William Will Suffer "Worst" from Harry's Memoir
Simone's Boyfriend Sent Her the Sweetest Message
Harry's Friends Don't Want to Be in His Memoir
Will & Kate's Modern Approach to Raising George
Meet Simone Biles's Super Supportive Parents
What Happens on Katie's Season?