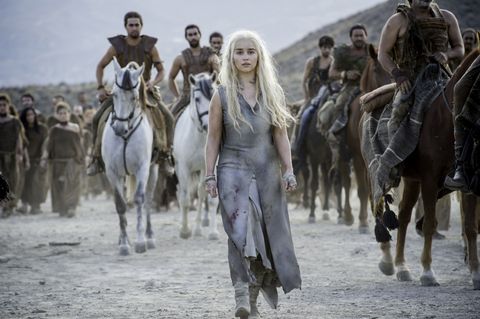 In case you weren't aware, Game of Thrones author George R.R. Martin has a Live Journal (please, take a moment to lolololololol), and occasionally spills details about his books/show. In fact, you might say that his presence is single-handedly what makes Live Journal continue to be relevant in 2017.

And in a post dedicated explicitly to recent rumors that several GOT spin-offs are hitting HBO, GRRM took it to his blog.

First of all, he confirmed that the rumors are true:

"Yes, it's true. More or less. [...] I don't especially like the term 'spinoff,' and I don't think it really applies to these new projects."

But don't get it twisted—these spin-offs are basically just new shows:

"What we're talking about are new stories set in the 'secondary universe' (to borrow Tolkien's term) of Westeros and the world beyond [...] just think how many more there are in an entire world, and one with thousands of years of recorded history."

In other words, don't expect your faves to show up:

"All of you who were hoping for the further adventures of Hot Pie are doomed to disappointment."

"Every one of the concepts under discussion is a prequel, rather than a sequel. Some may not even be set on Westeros. Rather than 'spinoff' or 'prequel,' however, I prefer the term 'successor show.'"

By the way, there are FIVE "successor shows" in development, not four:

"We had four scripts in development when I arrived in LA last week, but by the time I left we had five. We have added a fifth writer to the original four. No, I will not reveal the name here. [...] What we do have here is an order for four—now five—pilot scripts. How many pilots will be filmed, and how many series might come out of that, remains to be seen.

Here's what the shows *won't* be about:

"We're not doing Dunk & Egg. Eventually, sure, I'd love that, and so would many of you. But I've only written and published three novellas to date, and there are at least seven or eight or ten more I want to write. [...] We're not doing Robert's Rebellion either. I know thousands of you want that, I know there's a petition... but by the time I finish writing A SONG OF ICE & FIRE, you will know every important thing that happened in Robert's Rebellion.

"I AM STILL WORKING ON WINDS OF WINTER and will continue working on it until it's done."

Cool, but WHERE ARE THE RECEIPTS?!