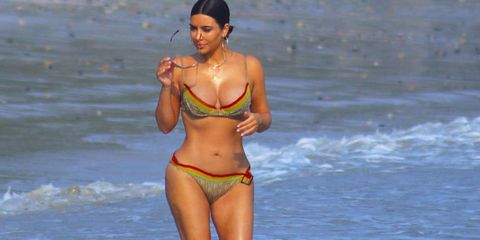 Remember back in April when Kim Kardashian was photographed on her Mexican vacation with her cellulite on full display? She looked amazing, but obviously the images went viral because in today's delightfully sexist world (sarcasm), things like cellulite are deemed "flaws."

And what was nice about Kim's moment in the spotlight was that she seemed to be embracing her "flaws" rather than photoshopping them. The thing is, now the reality star is saying that the images were actually altered to make her have more cellulite than she actually does.

"I saw these awful photos of myself when I was on a trip in Mexico and people were Photoshopping them and sharpening them, and they're the worst photos," Kardashian said on The View. "I definitely was not in my best shape. I hadn't worked out in about twelve weeks, I'd had two surgeries on my uterus. We documented that on the show. But I was already not feeling like myself and then when people were like sharpening them and making them look way worse, and then those were going around, I was like 'Okay, I'm going to get it together' and I started working out with this bodybuilder girl."

Obviously, Kim—like anyone—should be able to work on herself without judgement from other people, and if she wants to target her cellulite, more power to her. But let's make one thing clear: This isn't necessarily a problem than needs to be fixed. Plenty of women have cellulite, and it's about time we normalized it—with or without her help.