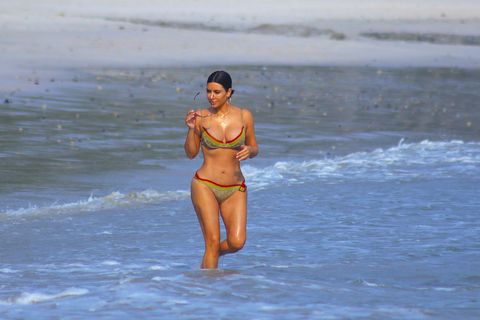 Kim Kardashian is currently on vacation in Mexico, where she's taken to wandering around in a bikini. This isn't unusual for Kim, but what is slightly unusual is seeing her body sans photoshop—and the internet quickly made note of her cellulite. Which, BFD—everyone has cellulite, Kim rules for not worrying about hers, etc.

Most of the chatter has been positive, except for—SHOCKER!—that of Piers Morgan.

The infamous TV personality (who seemingly loves nothing more than trolling women about their bodies) had a lot to say about Kim during Good Morning Britain. Actually, he started the conversation in an A+ way, musing "The great thing about these pics is she's not flawless like every other woman, like every other man, none of us is flawless. Present company excluded."

The thing is, Morgan's co-host Susanna Reid said, "I think we should celebrate cellulite, it's a fact of life for, I'd say, 90 percent of women," which is when Piers Morgan morphed into his body-shaming alter-ego .

"Why would we celebrate it? We put up with it, tolerate it, but not accept it," Morgan said while everyone presumably went from 😊 to 😶. "Flaws should not be celebrated. My thoughts are, she's just launched her new emoji of her backside next to an ashtray—which she's called it 'ass tray'—so I think her posterior is fair game."

Nope, it's a flaw.
Like my double chin.
Definitely nothing to 'celebrate'. https://t.co/CdBLmgX6Mo