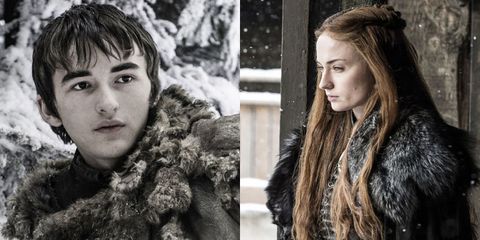 This post contains spoilers about Game of Thrones Season 7, episode 3, "The Queen's Justice."

This week's Game of Thrones featured a Stark family reunion. We were expecting Arya to show up at Winterfell, but Thrones threw us a curveball and brought Bran back instead.

Sansa was very excited to see Bran and, even though she's doing the BEST job running the show at Winterfell, she was also quick to offer him his "rightful" place as the Lord of Winterfell (she might be older, but he's a boy and Westeros is definitely a patriarchy). Bran turns her down, explaining that he's the Three-Eyed Raven now.

Bran goes on to prove that he actually is an omniscient being by very uncomfortably alluding to Sansa's rape.

When Sansa asks Bran to explain what it means to be the Three-Eyed Raven, he says:

When she still doesn't quite get it, he starts describing her wedding night, which he was not present for, and it visibly crushes Sansa to have to relive it.

I'm sorry for all that's happened to you. I'm sorry it had to happen here, in our home. It was so beautiful that night, snow falling just like now. And you were so beautiful, in your white wedding dress.

Sansa somehow manages to keep her cool, just saying, "I have to go back inside, Bran," and all but running away.

In an episode that included the poisoning of a grandmother and the vicious description of the murder of a mother and daughter, this was the most uncomfortable moment.