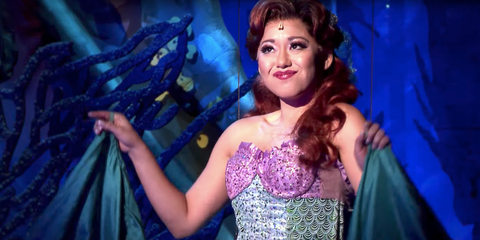 The Little Mermaid is one of Disney's most popular and timeless fairytales, and in the animated film, Ariel looks like this:

Basically, she's white with red hair, which sure. But that doesn't mean that real-life incarnations of the classic heroine need to follow in those footsteps—and Asian American actress Diana Huey has been dealing with racist criticism as a result of playing Ariel in Disney's musical production.

"It's never easy being up on a stage in front of thousands of people everyday baring your soul, pushing through exhaustion and just hoping that they'll like you," Huey wrote in a Facebook post on Saturday. "For me personally with this show, I've often also felt the added pressure of feeling like I have to work even harder to get the audience to like me or be with me because I'm not what they might have expected to see as an Asian American actor."

Huey adds that she didn't even think she had a chance of booking the role "because I'm Asian," and that looking back on her self-doubt makes her sad. "No one should feel like they aren't enough because of the color of their skin or the shape of their eyes or any factor outside of WHO THEY ARE," she continued. "I want to believe in a world where racism and bigotry no longer exists. I want to believe that we can truly have equality in this world—and the arts are a damn good place to start."