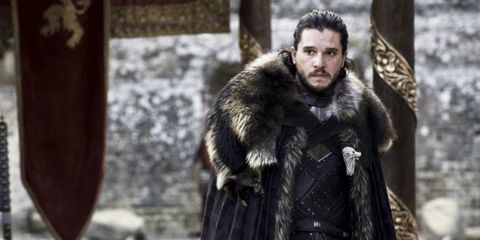 Welp, winter is finally here. The Game of Thrones finale has officially come and gone it brought with it plenty of revelations and twists, as per usual.

If there were still any doubt that R+L=J (and, let's be clear,there weren't), those doubts are officially gone. In a flashback, Bran sees Jon's parents, Rhaegar Targaryen and Lyanna Stark, make things official and tie the knot. So Jon isn't Jon Snow and he isn't Jon Sand, because he's not a bastard. He's not even Jon Targaryen because his birth name wasn't Jon at all, it was Aegon Targaryen.

Now, if that sounds familiar, it's because the Targaryens are big on reusing names. There are a few famous Aegons in the GOT world, so let's review:

The first Aegon Targaryen was the one who invaded Westeros and conquered all of the kingdoms except Dorne. He also forged the Iron Throne everyone is always so eager to sit on and began the Targaryen dynasty.

So here's a fun fact: Jon's dad, Rhaegar Targaryen, already had a son named Aegon Targaryen—that's actually the name of his son with Elia Martell. That Aegon was killed by The Mountain during the Sack of King's Landing, before Jon/Aegon was born. So it's possible the name is in honor of his dead half-brother.

In the books, there's a character who claims to be Aegon Targaryen (the one who died during the Sack of King's Landing), but he's widely believed by fans to be a faker and is thus known in fan circles as "fAegon." Although this character has been omitted from the series, in the books, he challenges Daenerys' claim to the Iron Throne since, as Rhaegar's son, he would be next in line. The same is technically true of Jon—he's actually the next in line for the Targaryen throne. This could be a hint that Jon will actually challenge Dany for the crown—if they don't just get married and share it, that is.