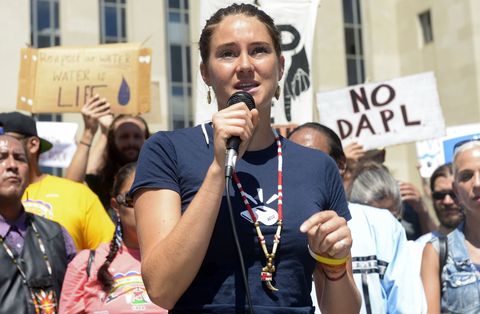 Shailene Woodley was one of the most vocal protesters of the Dakota Access Pipeline, and was arrested while at Standing Rock—an event that she chronicled on Facebook live. While the news was upsetting at the time, nothing could have prepared us for how awful the actual circumstances of the star's arrest were.

"I'm like, 'This is some Divergent shit,'" she told Marie Claire UK, explaining that the police told her to "get naked, turn over, spread your butt cheeks, bend over. They were looking for drugs in my ass."

Obviously strip searches are common, but—at least from an outside observer's perspective—this seems like a gross violation, and a disturbing decision on the part of whoever conducted the search. "When you're in a jail cell and they shut that door, you realize no one can save you," Woodley continued. "If there's a fire and they decide not to open the door, you'll die. You are a caged animal."

Shailene has talked about her arrest previously, and tried to step back from being to focus of the protest: "The day I was detained, 26 others had to dress in orange as well, as they were booked into the Morton County jail," she wrote in an essay. "Did you hear about them?" 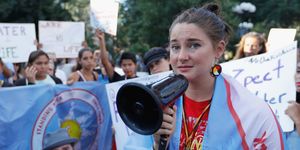