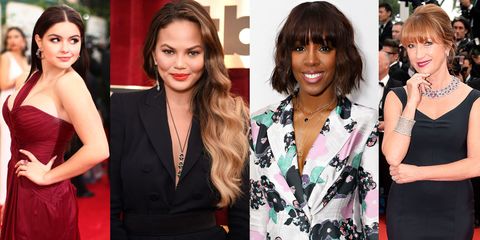 Whatever your stance on plastic surgery, to admit to getting something done in Hollywood is distinctly uncommon. Here, a look at the stars who weren't afraid of full disclosure.

No stranger to keeping it real, Chrissy Teigen recently opened up about the work she's had done. "Everything about me is fake except my cheeks," she joked, later clarifying (and admitting) that she did have lipo done on her armpits. ("The dumbest thing I've done.")

Earlier this summer, the 17-year-old Modern Family actress underwent breast reduction surgery, a decision she tells Glamour came about after years of back pain and discomfort growing up in the spotlight.

"It's hard when you're a teenage girl and you already have a lot of ridicule and then you pile on more, and it's kind of…it just gets too much," Winter said. "We live in a day and age where everything you do is ridiculed. The Internet bullies are awful. I could post a photo where I feel good, and 500 people will comment about how fat I am, and that I am disgusting. On [red carpets], I just said to myself, 'You have to do your best to look confident and stand up tall, and make yourself look as good as you can in these photos,' because everyone is going to see them. I definitely seemed confident; I'm an actress, that's what we do. But on the inside, I wasn't feeling so happy."

Now, Winter says she's exactly as she's "supposed to be."

Iggy talked openly about getting her nose done in the newest issue of Seventeen. "I'm not denying it, denying it is lame," she said. "Plastic surgery is an emotional journey," she continued. "It's no easy feat to live with your flaws and accept yourself—and it's no easy feat to change yourself. Either way you look at it, it's a tough journey. There are things that I didn't like about myself that I changed through surgery. There are other things I dislike but I've learned to accept."

But this isn't the first time the rapper has owned up to plastic surgery. Back in April, the rapper told Vogue, "Four months ago, I got bigger boobs!" Expressing that she was tired of having to add padding to her stage costumes, she was at first hesitant to share her decision in fear that her young fans would feel bad about their own bodies, but in the end, she felt honesty was the best policy. "I decided I wasn't into secret-keeping."

In an interview with People, the fitness guru admitted to going under the knife. "I had my nose done when I was 16 years old," she said. "And I'll be honest, it did change my life."

The Friends and Scandal actress admitted that she elected to get a nose job in high school. "I did it the summer before going to a new school," she told The Saturday Evening Post. "That was a good, good, good change."

The 62-year-old readily admits to having enough breast enhancement surgery to replace, as she puts it, "what the kids ate."

While the star has never talked about her actual procedure, she baaaasically confirmed it to Us Weekly: "As long as people have two eyes, you probably know the answer," she stated.

The 93-year-old actress looks as great as ever, but recently admitted to having a small procedure. "It's not nice to fool Mother Nature! But in 1976 I had my eyelids done. I scolded myself forever, but now I'm glad I did it."

The Middle actress has admitted to having a breast reduction and tummy tuck for one reason: "Vanity," she told People. "I had four C-sections and my stomach looked like the map of the world. My breasts were hanging down to here from breastfeeding those babies, and my nipples were like platters. I wanted to fit into the gowns that I finally got to wear."

The singer stated in 2013 that she had breast enhancement surgery after thinking about it for a very long time. "I wanted to get breast implants when I was 18, but my mom and Beyoncé's mom told me to really think about it first," she told Shape. "I took their advice and waited 10 years."

"Once I felt ready, I tried on padded bras and walked around in them to see how it would feel. You have to know what you're getting, no matter what type of surgery it is."

The iconic model has used anti-aging treatments throughout the years, but as far as altering her appearance she has admitted to one thing: fillers. "I grew up in Malibu then my real job of modeling took me to beaches all over the world and under the sun," she told People Style.

"I really am aware of all the sun exposure I’ve had in my life and I’m interested in things that they can do to [reverse the sun’s effects]...and occasionally I’ll do a little bit of filler."

On the other hand, Simpson told Glamour in 2006 she completely regrets getting fillers. "I had that Restylane stuff. It looked fake to me. I didn't like that. But it went away in, like, four months. My lips are back to what they were. Thank God!"

Perhaps one of the most memorable plastic surgery transformations in reality TV history. Montag admits she had a "plastic surgery obsession" and "became so consumed by this character that I was playing" (talking about her role on The Hills). She has since removed her breast implants after having over 10 different plastic surgeries.

It's no secret the late Joan Rivers has been under the knife many times. "At this age the only way I can get a man to touch me is by getting plastic surgery," she joked in 2013.

The former Friends star regrets getting lip fillers and injections. "You have no idea because it's gradual, until you go, 'Oh, sh*t. This doesn't look right.' And it's worse in pictures than in real life," she admitted. "I've had all my fillers dissolved. I'm as natural as I can be. I feel better because I look like myself. I think that I now look more like the person that I was. I hope I do."

In the beginning of the year Victoria Beckham wrote a letter to her 18-year-old self, and one of her biggest regrets is her breast implants. "And I should probably say, don’t mess with your boobs. All those years I denied it—stupid. A sign of insecurity. Just celebrate what you’ve got." 👏

The actress looks quite a bit different from her Dirty Dancing days. In 1989 she had a "nose job from hell" and admits, "I’ll always be this once-famous actress nobody ­recognizes because of a nose job.”

Advertisement - Continue Reading Below
Getty Images
19 of 30
Cardi B

Cardi B took to Instagram to respond to a fan who dissed her breast implants writing, "I TRUELY LOOOOVEEE MY BOOBS SINCE I Bought THEM...my first expensive purchase." (Along with her red bottoms.)

Kylie Jenner *finally* admitted she received lip injections, but regrets over-filling them. "I definitely made my lips a little too big at one point," she told Kim Kardashian West in a sibling interview with Allure.

"I got excited and felt like I needed to do a lot. And then you guys were like, 'Kylie, you need to chill.' And then I had to go back and have it fixed, and it was a crazy process. Thank God I didn't end up on Botched."

Osbourne revealed on The Graham Norton Show she's had quite a few plastic surgery procedures done. The most painful? "When I had my vagina tightened."

In her 2017 memoir Unqualified, Faris confessed she had lip injections and breast implants, which was inspired by her role in the 2008 movie The House Bunny.

Khloé Kardashian thinks plastic surgery "should be viewed almost like makeup, because we're all putting on a f*king mask basically every day anyway." She denies rumors of getting her nose done, but does admit she had face fillers.

Dianna Agron told David Letterman in 2011 she had her nose fixed because she broke it...twice. "I couldn’t get it fixed because we were in the middle of doing this concert tour and we were filming. We had a day off and I met up with some of my friends and we were dancing. And again, there was another collision of sorts—I must be turning too quickly, people don’t see me coming or something—but it’s fixed now!”

"I have had breast implants. But it's not a secret, I could care less," Kardashian told Nightline in 2010, although she does regret it. "I had my boobs done but if I could go back, I wouldn't have done it," she said. "I was so cute before. I've realized that I was made to look a certain way and I'm considering removing them."

In 2008 Tisdale vowed to never get another plastic surgery after getting her nose done in 2007 for a deviated septum.

Fonda admitted plastic surgery "bought her a decade." However, Megyn Kelly recently asked the iconic actress about it, and it did not go over well. "We really want to talk about that right now?"

Paltrow admitted she had some botox done, but would never do anything else. "I would be scared to go under the knife, but you know, talk to me when I’m 50. I’ll try anything. Except I won’t do Botox again, because I looked crazy. I looked like Joan Rivers!”