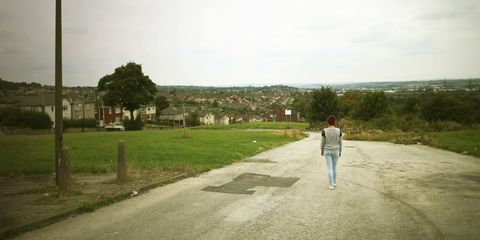 There are very few people who know the full story of my childhood. Friends know bits and pieces—that I was adopted, maybe, or that my parents have passed away, or that I am uncomfortable in crowds—but the details are often too much for me to share or for people to hear. I'm speaking out now in the hopes of urging anyone having a hard time to seek help, and in an attempt to find other survivors like myself.

I am a product of incest. My grandfather sexually abused my mother—his daughter—for years, eventually getting her pregnant, and I am the result. He's my grandfather and my father; his other seven children are my aunts and uncles, and my brothers and sisters.

For years, my mother, the oldest, put up with the abuse through a twisted agreement with her dad: Do what you need to with me, as long as you leave the other daughters alone. She was 18 and a mother to me before she learned that he never actually kept this promise, which is when she fled.

She also decided to finally report the abuse to the Department of Human Services. My family had escaped attention by staying on the move and isolating themselves from any kind of community. They lived in various hotel rooms and never sent the kids to school. In a strange coincidence, my mother went to authorities at the same time that two of her brothers were found by police after running away. Their stories were so similar that social workers connected the dots.

[pullquote align='C']My mother, the oldest, put up with the abuse through a twisted agreement with her dad: Do what you need to with me, as long as you leave the other daughters alone.[/pullquote]

It took another six months, though, before one pulled my mother aside and asked her gently about my parentage. The whole family maintained that she was knocked up by some maintenance worker in one of their hotels, but the social worker pressed her until she broke down and admitted I was my grandfather's child. No one caught on earlier—it wasn't exactly as if she was going to pre-natal appointments and putting sonograms on the fridge. A blood test was more than enough to seal my grandfather's fate, and he was sentenced to 20 years for sexual abuse and incest. (He was released two years ago, but is on the sex offender registry—I track his whereabouts to this day to make sure he's nowhere nearby.)

I was sent to live with my grandmother, who had been a silent witness to the horrors her husband performed. She wasn't mentally stable herself, and she saw me as the love child of her husband's infidelity—to her, my mother was the other woman. So she regularly beat me, and peppered me with constant psychological abuse. When I did something that displeased her, she reminded me that my bad behavior was because I was a "child of Satan."

Many teenagers are angry, and many experiment with drugs and alcohol and sex. My fury was huge, and I sought refuge in prescription painkillers and pot. I got pregnant with my high-school boyfriend when I was 16—and my child finally changed my life for the better.

I stopped drinking and smoking the second I found out, and all my focus was on giving this kid a better life than I had. When I gave birth, the doctors took one look at a pregnant teen covered in bruises and reported me to social services. My son and I were sent to a foster home, but the social worker assigned to my case was the same one who had helped my mother and brothers all those years ago. She decided to adopt me when I was 17.

[pullquote align='C']She reminded me that my bad behavior was because I was a "child of Satan."[/pullquote]

After that, I had some semblance of a normal life. I graduated valedictorian of my high school class. I married my high-school sweetheart, the father of my child. We had another son, and my husband entered the Marine Corps.

Throughout these years, as a stone-sober working mother in her late teens, I struggled with intense anxiety and the fog of depression. I was even institutionalized for a time after a suicide attempt. When you're in a mental hospital, you can either talk about your problems or color with crayons in the recreation room. Coloring gets a little dull. So I started talking, and I started journaling. I wrote nonstop, in my room, around others, in the cafeteria during meals. It all flooded out. I still read those journals when I'm having a tough day, to remind myself of how much I've overcome.

There are other sources of comfort. I have several really supportive friends. My husband and I divorced, but oddly enough I wound up bonding with his new wife. She visited me in the hospital and brought me drawings from our sons. Then there's my roommate, who is aware of my anxiety triggers. Instead of glossing them over, he pushes me to deal with them—if we decide to go shopping and then all of a sudden I can't get out of the car, he just sits next to me and waits for the panic to pass. We will chat for 45 minutes while I calm down, and then I'm like, "All right, let's walk into the store."

I also have a psychiatric-therapy dog. He's a big, fluffy Saint Bernard who is trained to know my triggers, and will sit on my feet to literally block them from me and calm me down. If I have a panic attack, he will locate pressure points and push his giant head into them until my breathing returns to normal. I've always loved animals, and I volunteer as a vet tech in my spare time.

You may wonder about my health, considering the complicated web of a gene pool I came from. Any diseases that were in my dad's side of the family I have a high risk for, because I have so much of his DNA. I've battled cervical cancer twice, and because my joints didn't develop correctly, I already have arthritis. One doctor told me, "You're a 23-year-old with a 53-year-old's body."

Dating is terrible for most people, and I'm no different. But I try. Intimacy is really tough—both emotional and sexual—so I set limits. The dos and don'ts of getting close to me.

[pullquote align='C']My sons are my incentive. They teach me how to be capable of joy.[/pullquote]

And there are my sons. At the moment, they are 6 and 4, and all they know of my past is that mommy is an orphan who was adopted. When I'm with them, a switch gets flipped and I am in happy mode. They motivate me to get out of bed, to go to work, to keep going, to smile. The cycle of abuse has stopped with me. They are my incentive. They teach me how to be capable of joy.

I've spent enough of my life being angry. And enraged about my past, and resentful of my family, and pessimistic about humanity's enormous capacity for evil. I am done being angry.

I founded a support group for people like me, and hope to form a network of survivors. I am okay with the past. It's the present and the future—my career, my animals, my hope for love, my bright, beautiful boys—that I want to talk about now.

Kaitlin Menza Kaitlin Menza is a freelance features writer.
This content is created and maintained by a third party, and imported onto this page to help users provide their email addresses. You may be able to find more information about this and similar content at piano.io
Advertisement - Continue Reading Below
More From Culture
The Best Lesbian Movies Streaming on Netflix
Listen to the Best New Love Songs of 2021 (So Far)
Advertisement - Continue Reading Below
Who Is Christine Chiu on Netflix's 'Bling Empire'?
Could 'WandaVision' Get a Second Season?
Avengers Fans, Assemble: 'WandaVision' Is Here
Where Is Night Stalker Detective Gil Carrillo Now?
What We Know About Part 2 of 'Lupin'
A Look Back at Princess Anne's Life in Photos
Where Is the Cast of 'Gilmore Girls' Now?
The Most Hotly Anticipated TV Shows of 2021