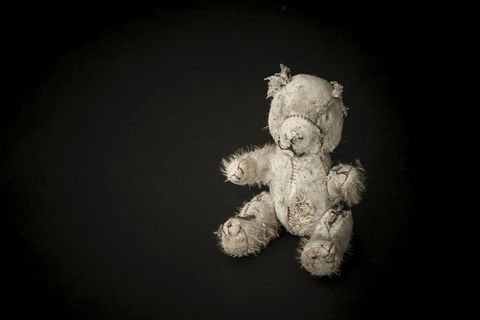 The images have no beginning and no end. As far back as I can remember, I see cameras, adults touching me, giving me something to drink. I see lingerie in miniature sizes. My earliest memories are of being forced to pose for child pornography, of being sexually abused.

I grew up near a major interstate highway. My abuser would bring me to rest stops so truckers could rape me. He connected with them via CB radio, and would bring me in a van so the deed could be done right there along the highway, or pick up the trucker and drive them back to wherever I was waiting. I remember them, from when I was just six years old.

There were photos and "parties," too. I was made to dress in lingerie and then brought to warehouses, where men would be gathered with cameras. Other kids were there, too. We were given alcohol or injected with drugs to make sure we stayed calm, hazy, compliant.

I don't remember protesting; I remember thinking this was normal. I didn't know any better. It wasn't until maybe sixth grade, when I was socializing with other kids at their homes and with their families, that I realized my life wasn't like theirs. None of my friends went to warehouses. None of them were touched.

As far back as I can remember, I see cameras, adults touching me, giving me something to drink. I see lingerie in miniature sizes.

"This isn't fun anymore," I remember telling my abuser. It had never been fun, but the parties and touching were always framed as a privilege. You're such a special girl, he'd say. That's why you get to go to parties. That's why you get to have your photo taken. Since he cared about me so much, I thought he would of course allow me to bow out if I wasn't enjoying myself. Instead, he left my life. The abuse was over by middle school.

My coping mechanism was to bury myself in schoolwork. I was determined to go to college, which wasn't very common in my small town. My dedication to homework didn't win me any popularity awards, but I had a couple of friends in high school. I even had some boyfriends.

I was drawn to classes where I learned about gender and the psychology of abuse. I decided to pursue a Master's degree in gender and cultural studies. Researching prostitution and sex trafficking helped me put my own puzzle together. Truck stops are havens for child abuse, I learned—there is even a group called Truckers Against Trafficking to help end the association and eliminate the business.

One of my favorite professors told me, "We study our pain." I certainly studied mine. I read that child abuse and these horrifying sex rings are about power and money, like everything else. The abusers need to feel powerful. The facilitators—photographers, parents, even police officers—need to get rich.

My abuser was well connected—it was the only way to keep hidden the fact that there was a warehouse in our town hosting sex parties for pedophiles.

It can be paralyzing to consider this kind of collusion. Is anyone trustworthy? Is any town safe? Do all humans have the capacity for such depraved behavior? Instead of making me feel worse, studying these patterns helps me cope. Many sexual abusers were themselves abused; it makes them feel powerful to turn around and do it to someone else, to inflict their childhood trauma on another child. It can feel exciting to them to keep this secret, to perpetuate it.

Given my past, I'm never surprised when I find out someone is a pedophile or a sex offender. Not teachers, not public figures, not celebrities like Jared Fogle or Josh Duggar.

I threw myself into my work as a research scientist and advocate to try to make the cycle stop. By the age of 30, I was able to open myself up to a social life—and even, eventually, a husband. I came with a lot of baggage, but he saw me as I wanted to see myself.

We adopted a son, who is now 10 years old. He came from a foster home, and in a way we may have saved him from abuse of his own. What does he know about my past? Only that "mommy had a hard childhood," and that my job is to "keep kids safe." Maybe someday I'll tell him the full story.

Now, I'm even more horrified by the concept of child abuse. My role as a parent is to protect, and sometimes the mama bear comes out. Given my past, I'm never surprised when I find out someone is a pedophile or a sex offender. Not teachers, not public figures, not celebrities like Jared Fogle or Josh Duggar. I will occasionally get a creepy sense about someone—a vibe or demeanor that is consistent with both my memories and my research. I don't always make accusations, but I've had many difficult private conversations. Don't leave your child alone with that man, I'll advise a fellow parent. Just trust me on this. I don't want to publicly ruin a person's life if I don't have clear evidence that they are abusive, but I do want to protect my child and any child I can.

People's sixth senses about these things are often correct. When I've shared my story and named my abuser with people in my hometown, they nod. Yeah, I always thought something was going on there, they'll say. Then why didn't you say anything?! my brain screams. It's the only things that moves me forward: You have to say something. You have to ask the kids. Ask the person. Ask the police. Send in a tip. Raise a question. I had something to say, and I'm saying it now.

Due to the sensitive nature of her story, our subject has requested to remain anonymous, and we've removed identifying details from her account. If you suspect child sexual abuse in your town, please call the National Center for Missing & Exploited Children's tipline at 1 (800) 843-5678, or report activity here.