Think back to yesterday. It was a fine day. There was a story about a hotel owner publicly shaming an influencer who wanted to stay for free in return for publicity. Now it’s today. Another unremarkable day. Except that same hotel man is now billing that same influencer for about $7.3 million for the publicity she’s received from their viral saga.

Yes, in an additional Facebook post, White Moose Cafe and Charleville Lodge owner Paul Stenson posted a picture of a bill he planned to send to Elle Darby. In it, he charges her 4,300,000 Euro (~$5.3 million) for “the provision of features in 114 articles across 20 countries with a potential reach of 450 million people.” That’s before taxes.

He also notes payments must be made with actual money and that “mentions in videos will not qualify as payment.” To support his billing claim, Stenson commented on the post with a link to a LinkedIn article, which explains Darby, whose YouTube views spiked massively after this whole mess started, benefited from the debacle.

See you tomorrow for the next episode of This Year Is Already Stupid, Pt. 36! 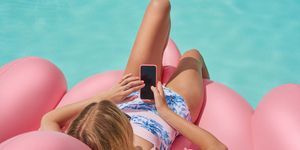 The Ghostwriters Behind Your Favorite Influencers

Tess Koman Senior Editor Tess Koman covers breaking (food) news, opinion pieces, and features on larger happenings in the food world.
Advertisement - Continue Reading Below
More From Culture
The Best Cooking Shows on Netflix
The Wildest Reviews of Joe Exotic's Zoo
Advertisement - Continue Reading Below
What Happened to Doc Antle from 'Tiger King'?
Is Joe Exotic Still in Jail?
What Happened to Dillon Passage from 'Tiger King'?
Julia Louis-Dreyfus Has All the, Uh, Right Answers
Just 41 Wildly Funny 'Tiger King' Tweets
Beach Music to Get You Excited for Warm Weather
These Classic TV Shows Are Available to Stream
America Is Crushing on My Boyfriend Andrew Cuomo