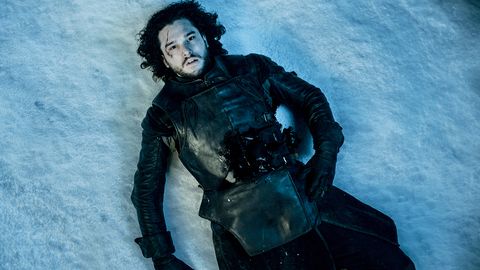 George R. R. Martin, the author behind the series Game of Thrones is based on, has always taken the writing adage "kill your darlings" very literally. He doesn't just kill his darlings, he kills all of our darlings. Fans learned quickly not to get too attached to characters, because Martin doesn't hesitate to kill off characters who feel like vital protagonists in a split second.

Martin has finally explained the origins of this ruthlessness, and no, it doesn't have anything to do with anger issues or secretly hating his audience. He was actually inspired by another famous fantasy writer, J.R.R. Tolkien. Tolkien wrote the Lord of the Rings books and, during an interview for PBS’ The Great American Read, Martin admitted that one of Tolkien's major character deaths really stuck with him as a kid—and shaped him as a writer.

"Gandalf dies!" Martin says of the moment that made him a killing machine (in books, anyway). "I can’t explain the impact that had on me at 13."

So why did that death change the course of fantasy books and TV forever? Because it made the suspense "1,000 times greater," Martin explained. "Because now anybody could die."

He also added that Gandalf's death "had a profound effect on my own willingness to kill characters at the drop of a hat."

Martin has killed off several beloved characters, beginning with (spoilers ahead, obviously) the shocking death of Ned Stark at the end of the first novel in the series (or, at the end of Season 1, for Thrones watchers).

While the HBO series has now passed the books, the showrunners have continued to kill of major characters and, with the final season approaching, fans know that many of their favorite remaining characters probably won't make it. But, if the reason for the high body count is to create suspense, maybe that means some of our faves will be spared at the end—since there's no need for suspense when the story is over.