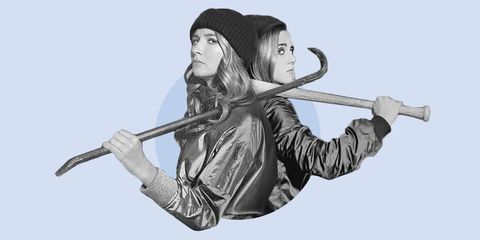 One in five women are sexually assaulted while in college. So, you'd think television shows that take place on campus would spend at least a fifth of their time parsing through the issue, right? Right! Except they don't. When it comes to TV, violence against women is either sensationalized, relegated to one-off specials, or ignored completely. But Sweet/Vicious is here to change that.

MTV's groundbreaking new show centers on two college vigilantes, Jules and Ophelia, who take it upon themselves to get revenge on the rapists that populate their school. Yes, it's an ambitious project that'll probably endure plenty of (ahem, largely sexist) criticism, but given the massive influence pop culture has on millennials, this show is vital viewing.

"I wanted to write something that could be for this generation, and could be more than pretty faces and surface-level problems," creator Jennifer Kaytin Robinson tells MarieClaire.com. "Millennials are a lot smarter than entertainment gives them credit for. There's no reason these subjects should be taboo and go un-tackled. It's a no brainer."

As Eliza Bennet (who plays rape survivor Jules) points out, the show doesn't feel like medicine. Its powerful message isn't forced down your throat with syrupy sweet montages and manipulative musical cues—instead it delivers Ruth Bader Ginsburg references and on-point nods to pop culture, all of which make is extremely palatable.

"There's a stigma that if you're going to talk about these issues, then they have to be really depressing and difficult to watch," Bennett says. "That's not what we've created. The show focuses on women, female friendships, and the college experience—it packages everything together to be something people will want to watch."

What people might not want to watch is a show that makes men the enemy, and while Men's Rights Activists are sure to complain bitterly no matter what, Sweet/Vicious doesn't fall into that trap. The key? The male protagonists are straight-up wonderful. Meanwhile, the show's main antagonist Nate is multilayered. "Kids are not educated on consent and don't know what they're doing," Robinson explains. "When you're really little, boys are told to 'be a man,' and girls are told to 'be a good girl,' and we're trying to rip that apart a little bit on this series."

While Sweet/Vicious isn't obligated to do anything other than tell its story, the show is well aware of the responsibility it has to educate viewers (expect both trigger warnings and PSAs throughout). It's also aware that telling a story about the college experience is impossible without touching on racism.

"It's an issue that truly, truly needs a voice. And we're giving a voice to the voiceless."—Brandon Mychal Smith

"We want to tackle race relations with an authenticity and truth," says Brandon Mychal Smith, who plays Ophelia's friend Harris. "It'll be one of the main themes and storylines in the show—it's just as central and important in terms of utter urgency in this day and age. It's an issue that truly, truly needs a voice. And we're giving a voice to the voiceless. "

Its this exact message that makes Sweet/Vicious so important. Racism, sexism, assault—these are the subjects millennials are talking about in real life, and they deserve to be represented on television. And even if you watch Sweet/Vicious and don't love it (doubtful, it's really good), let's take a moment to recognize the importance of there *finally* being a show that takes on society's most important issues in a way that's accessible, clever—and yes—funny.