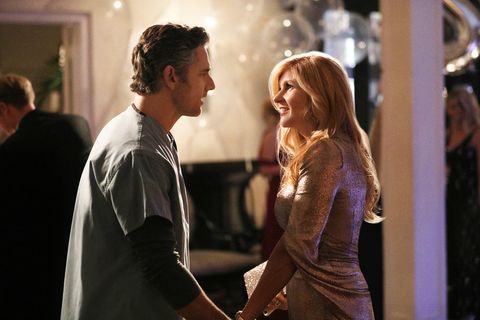 Last year, Dirty John took over the world as the true crime podcast du jour. A collaboration between the Los Angeles Times (which reported the true story) and podcast production company Wondery, it seemed like everyone had Debra Newell’s life and choices on their minds. So it comes as little surprise that Bravo scooped up the batshit tale for a series order.

With its premiere Sunday night on Bravo—a network that’s not a stranger to wealthy women making poor decisions—a whole new demographic was exposed to this shocking-but-true story. The series premiere had some elements of humor but didn’t stray too far from the eeriness and terror that the podcast conjured. Plus, with Connie Britton as Newell and Eric Bana as the titular John, you’re bound to get some capital-A Acting.

After watching, I was not surprised to learn that the creator and writer of the Dirty John series, Alexandra Cunningham, spent years as one of the top writers and producers of ABC’s Desperate Housewives—a show which also combined comedy, drama, and Pinot Grigio to deadly effect.

The first episode felt especially timely, premiering in the last moments of Thanksgiving weekend while featuring the central family celebrating Thanksgiving—a real “this could be you” moment. From there, we’re led down a fairly familiar path to anyone who loved the podcast and/or LA Times story.

Still, there were some differences that clearly diverged from the source material. Here are some of the most major changes:

We get a little more of Debra Newell’s life pre-John.

The show starts with her and her coworkers talking about work, clients, and her excitement for her upcoming date with a guy named John. (It was at this moment that I first shouted into the screen, “Run girl! RunI”).

We’re able to actually see Debra as the powerful, smart businesswoman we were merely told she was on the podcast, getting a glimpse into her giant warehouse of interior design goods and watching her call the shots.

There’s commentary on the nature of online dating.

The show is obviously trying to appeal first and foremost to fans of the original Dirty John podcast and longform story, but it fleshes out subplots that could appeal to people who were tuning in for more decidedly Bravo-y content. I felt this mainly in its commentary on the struggles of online dating, something with which many, many of us are familiar.

Before her date with John, we see the ghosts of Debra’s Bumble-dating past, with men saying all the wrong things (or nothing at all). It adds some relatable humor but this addition also helps viewers see where Debra is coming from—and why she may be willing to ignore some major red flags when she finally meets a nice, handsome man with a job. I mean, wouldn’t we all?

We actually see John at his work—and early on.

Like the podcast, the show is very much told from Debra’s point of view. But, there are some scenes earlier on than I expected that showed John interacting with patients, totally in work mode. (You may recall from the podcast that whether or not he actually worked in a hospital was questioned right away).

Plus, the Debra in the show doesn’t believe that a doctor also has a nursing degree (real-life Debra fell for this lie), so the show instead gives him the role of anesthesiologist nurse—a more believable job title.

Jacquelyn kind of isn’t in it.

Jacquelyn Newell, eldest daughter of Debra and early adopter of the “John Is Sketchy as Hell” theory, seems to have opted out of having her likeness appear in the adaptation. But obviously since it’s real life it would be kind of impossible not to have her character in the show, so the network changed her name to Veronica. Which makes sense, because I feel like most Jacquelyn’s could easily pass for Veronicas.

Family therapy is more of an integral part of the Newell’s lives.

In the show, we see Debra and Veronica going to a therapist every week to work on their relationships with men and each other—a routine that, in this version, was part of their lives long before John came into the picture. Here is where we are able to get more of the backstory of Debra’s dating life and her desire to be happy in love, despite four divorces.

The show has a sense of humor.

Debra’s daughters, Jacquelyn (now Veronica) and Terra, can be a little polarizing on the podcast. Their valley girl twang seems like a mix of Clueless and The Simple Life and it’s a lot! It’s almost impossible to recreate sincerely, at least sans a Birkin bag and an address three blocks from Lauren Conrad’s house.

Luckily, Juno Temple and Julia Garner—the actresses who portray them—don’t go the Jimmy Fallon “Eww!” Girls route with their performances. Instead, they’re so believable I did a double take when I realized Garner is British IRL. Julia, can you teach me how to do an accent?

With their performances, they offer some great light elements to the show, from scoffs offscreen to silencing someone while making a smoothie—an artform I had never seen before.

There’s a sex scene to Annie Lennox’s “I Put A Spell On You.”

I mean, how perfect for this show? Because John really does cast a spell on Debra!

Besides that, how perfect for me? Because now all I want in life is to watch Connie Britton and Eric Bana be more attractive than me together to Annie Lennox.

Their marriage location and situation change.

In the show, Debra has to head on down to Vegas for a design showcase—something I would normally think was fake, but after my years of watching Lisa Vanderpump go down to Vegas almost every other weekend, I can vouch for the network. Their whirlwind weekend over martinis and gambling ends with a classic Vegas wedding.

It’s a scientific fact that Connie Britton makes everything 250 percent better. Obviously she wasn’t in the podcast, but like… she could have hosted it? Just intro-d it? Or listened to it with me? Honestly, I trust her to have done the preliminary reporting on this story.

I may or may not have spit out my Sunday Night Sauvignon Blanc when “Sweet Escape” came on during a beach montage of John and Debra.

So far, it seems that the show is honoring the podcast as much as it can while also trying to dive into a very new media trend: Podcast adaptations on TV. The resulting show has some rocky parts here and there (a glut of ominous staring really heightens the melodrama), but fans of the story will love the rehash, and Bravo fans will definitely love the giant houses they can’t afford with wine glasses they also can’t afford. As one of those fans, it is where we feel most at home.

Besides, the last line of the episode, delivered by patient who was supposed to have been given anesthesia by John—“I can’t feel it, it’s like he gave me nothing”—is beyond enough to hook you in for episode two.

Related Story
Everything You Need To Know About 'Dirty John'
This content is created and maintained by a third party, and imported onto this page to help users provide their email addresses. You may be able to find more information about this and similar content at piano.io
Advertisement - Continue Reading Below
More From Culture
'The Great British Baking Show' Is Coming Back!
'Bachelor In Paradise' Spoilers: Your 2021 Guide
Advertisement - Continue Reading Below
'Bachelor In Paradise' 2021: Everything We Know
Films With Plot Twists You'll Never See Coming
Mimi Keene Stole the Show in 'Sex Education' S3
'Virgin River' Season 4: Everything We Know
Watch the 'The Morning Show' Cast Play Trivia
Fans Are Already Clamoring for 'Sex Education' S4
Gina Yashere Shares Her Fav Black Female Authors
The 69 Most Graphic and Gorgeous Sex Scenes on TV