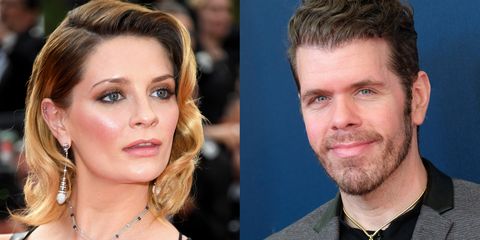 The Hills: New Beginnings may take place almost an entire decade after the events of the original MTV series, but as we've already seen just in the first two episodes of the reboot, time doesn't heal all wounds. For some, forgiving and forgetting is a lot easier said than done. Just ask Mischa Barton and Perez Hilton.

Last night, fans watched as the actress and new member of The Hills: New Beginnings cast confronted her longtime nemesis Perez Hilton at Stephanie Pratt's "Pratt's Back!" welcome home party. The gossip blogger received a warm welcome from Spencer and Heidi—he's the godfather of their toddler, Gunner—but the tension between him and Mischa was so thick, you could cut it with a knife. The beef between these two Hollywood figures goes waaaay back.

Remember the early 2000s? It was the best of times (Baby Phat jeans! Gossip Girl! Neopets!), it was the worst of times (9/11), but for Mischa, it was the height of her career. Though she had already had several acting roles under her belt, Mischa's career took off when she joined the cast of the FOX teen drama The O.C. On the hit series, Mischa played the role of Marissa Cooper, a wealthy and troubled Orange County teen, and audiences across the country tuned in to the network every week to see what shenanigans she would get up to. The show, which aired from 2003 to 2006, ran for four seasons and earned Mischa a number of Teen Choice Awards as well as the coveted "Next Best Thing" title from Glamour.

Mischa was on the up and up, but the rumors swirling around her threatened to dull her shine, and Perez Hilton's mean-spirited two cents certainly didn't do her any favors. The celebrity blogger, often called the "most hated man in Hollywood," was known for reporting (using that word very loosely here, folks) on the going-ons of celebrities. Perez built his career on celebrity gossip and what we would today unequivocally consider cyber bullying, never missing an opportunity to throw jabs at A-listers. Mischa found herself in the limelight for another reason when the blogger released a number of disparaging stories about her professional and personal life; he gave her a particularly distressing nickname and went out of his way to drum up only the harshest, most negative reports about her life, ultimately seriously affecting the actress in a negative way. You can read some of the blog posts, if you want to, here and here.

Fast forward to now. When Mischa finally got her chance to confront her nemesis face to face, she didn't hold back, letting him really have it from beginning to end. "This bullying that you did for so long to so many young girls, I find it hard to let go," Barton asserted at the party to the wide-eyed surprise of the guests. "I don’t really sit well with people who purposefully harm other people."

Unfortunately, the tense conversation didn't end in a hug or even a truce—Perez made a swift exit when he realized that his apology wasn't being received in the way he'd hoped—but perhaps more importantly, Mischa was able to speak her peace after dealing with the pain of her past for so long. Holding Perez accountable for the damage that he inflicted on her and other celebrities in the past was necessary in order for Mischa to close that chapter of her life and take advantage of her new beginning (sorry, I had to). This beef, like so many others on The Hills: New Beginnings, may not be totally squashed, but at least Mischa stood her ground. Good on you, girl.

Related Story
Every Great TV Show of 2019
This content is created and maintained by a third party, and imported onto this page to help users provide their email addresses. You may be able to find more information about this and similar content at piano.io
Advertisement - Continue Reading Below
More From Culture
Are Chloe and Mitchell from 'The Circle' Dating?
Get to Know DeLessa From 'The Circle'
Advertisement - Continue Reading Below
The Best Korean Dramas to Get You Hooked
Did Beyoncé Really Meet Selena?
How Selena's Sister Honors Her Memory
Get to Know Courtney From Season 2 of 'The Circle'
Meghan Will Release Debut Children's Book in June
Celebrate AAPI Heritage Month With These Leaders
Historical Films to Stream If You Loved 'Hamilton'
A Look Back at Princess Anne's Life in Photos