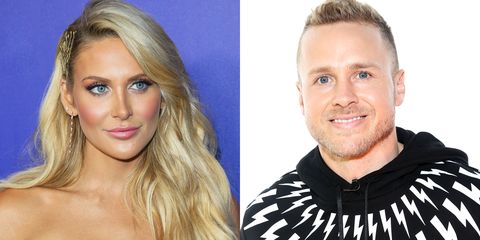 With the new season of The Hills: New Beginnings, our reality television faves have returned to our screens, armed and ready with some new, more grown-up, and genuine drama to thrill viewers. New but familiar faces Mischa Barton and Brandon Thomas Lee added their own storylines to the mix, and Audrina Patridge's lasting chemistry with ex Justin Bobby Brescia still has fans on the edge of their seats. However, it's the tension between Spencer and Stephanie Pratt that has viewers most glued to their television screens.

Nearly ten years have passed since The Hills graced our television screens, but the Pratt family feud has carried over into the new series, and it looks like it's not dying out anytime soon. Even before The Hills: New Beginnings aired, a cloud of rumors swirled around Spencer and Stephanie's strained relationship; one such report from Stephanie herself described multiple trips to the hospital that were triggered by the emotional strife with her brother. The siblings have been throwing so many shots at each other in the press for so long that it might be hard to remember how the beef even started in the first place.

We were initially introduced to Stephanie in the third season of the reality show, and she was staunchly Team Speidi—her first appearance on The Hills was a scene in which she publicly berated Lauren Conrad for being "mean" to Spencer and Heidi. However, after discovering that she and Lauren were enrolled in the same class at FIDM, Stephanie warmed up to her brother's nemesis, eventually finding herself in the middle of their bitter feud. Furious at what he considered a total betrayal, Spencer firmly drew the battle lines between himself and Stephanie. Any kind of sympathy towards Lauren, who Spencer to this day maintains is a "cold-hearted killer," was a declaration of war. And war they did, on and off for years, until they were totally estranged.

Fast forward almost a decade later, and the Pratt siblings have yet to forgive or forget the bad blood between them. Stephanie has returned from London with a new attitude (and a peculiar new accent to match), and Spencer has turned over a new leaf after the birth of his son Gunner, but if the premiere of The Hills: New Beginnings is any indication, it looks like these two are anything but keen to call a truce. A change of heart could very well be in the cards—we'll just have to see how things play out in the next few episodes.

Ruby Rose Is the New Face of Urban Decay
This content is created and maintained by a third party, and imported onto this page to help users provide their email addresses. You may be able to find more information about this and similar content at piano.io
Advertisement - Continue Reading Below
More From Culture
The 'Who Killed Sara?' Cast: Your Complete Guide
The 'Paradise City' Cast Plays Trivia
Advertisement - Continue Reading Below
Sad Movies for When You Need a Good Cry
What Happens When Prince Philip Dies?
Photos of Prince Philip with His Grandchildren
The Queen and Prince Philip's Marriage Timeline
'Too Hot to Handle' Is Coming Back This Summer
The New Netflix Original Films You Can't Miss
The Good and the Bad of Mom Influencing
Is Concrete Cowboy a True Story?