Spoilers for The Crown. In one storyline that is receiving criticism from royal experts, season 3 sees members of the British Royal Family taking a very active role in breaking up Camilla Parker Bowles and Prince Charles. Specifically, Lord Louis Mountbatten, Charles' great-uncle and mentor, and the Queen Mother (Elizabeth's mom) are seen speaking to Camilla and Andrew Parker Bowles' family, effectively forcing a wedding between the two.

It's known that the Royal Family saw Camilla as "unsuitable" as a match for Charles (Mountbatten referring to Camilla's relationships with other men as part of the reasoning), but what's true about this storyline?

In the episode, the Royal Family, including Queen Elizabeth, is made aware of the relationship and the "unsuitability" of Camilla. Mountbatten uses his influence to send Charles overseas through the Navy, and the Queen Mother and Mountbatten conspire together. They bring in the families of Andrew Parker Bowles and Camilla Shand for a sit-down meeting, in which it's not shown but heavily implied that the two families are strongly encouraged-slash=forced into marrying their children. Camilla does tell Charles that her feelings for him are real...but her feelings for Andrew are stronger (which is apparently based in fact).

The subterfuge is apparently untrue.

The only other aspect of the story that could be true is that Mountbatten may have had an influence on Charles' overseas posting to hinder the relationship's progress, but even that isn't verified. Everything else is fabrication, apparently. Royal biographer Christopher Wilson says that the Queen Mother never even liked Mountbatten. "She always treated him with suspicion, always," he explains.

And biographer Penny Junor insists that Camilla was deeply in love with Andrew despite his bad behavior towards her, so their wedding made sense. Something so nefarious as "orchestrating" a wedding between Camilla and Andrew apparently doesn't have roots in reality.

Now, after Camilla and Charles got back together the second time while both were married, the palace apparently did try to split up the couple. But this was, obviously, unsuccessful, since Camilla remains in Charles' life today. But as for this underhanded subterfuge to break up the two when they were young, it's reportedly false.

Related Stories
How the Royal Family "Broke Up" Charles & Camilla 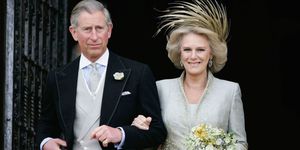 Prince Charles and Camilla Love Story
This content is created and maintained by a third party, and imported onto this page to help users provide their email addresses. You may be able to find more information about this and similar content at piano.io
Advertisement - Continue Reading Below
More From The Crown
Princess Diana's Butler Talks 'The Crown'
Yes, Prince Charles Really Survived an Avalanche
Advertisement - Continue Reading Below
'The Crown' Copied Princess Di's Style Perfectly
Who Are Margaret Thatcher's Kids, Carol and Mark?
Who Is Sarah Spencer in 'The Crown'?
Princess Diana's Wedding Dress Is Now on ﻿Display
'The Crown' Season 4 Is Coming So Soon
Will Harry & Meghan Feature on 'The Crown'?
Imelda Staunton Will Play the Queen In 'The Crown'
Fact-Checking the Third Season of 'The Crown'