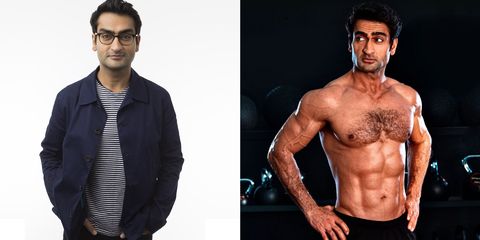 While you were mindlessly scrolling through Instagram today, as is everybody's Monday morning ritual, Silicon Valley and The Big Sick star Kumail Nanjiani dropped the transformation to end all transformation. Nanjiani has spent the last year training heavily for Marvel's The Eternals, and, um, it shows in this thirst trap of a photo.

Back in August, it was announced that Nanjiani was going to be in the upcoming Marvel movie, The Eternals, alongside what seems to be like the greatest cast ever: Angelina Jolie, Richard Madden, Salma Hayek, Gemma Chan, Kit Harington, and more. So, obviously, if you're going to be in a Marvel movie, you have to be ridiculously fit. Like, we're talking Chris Pratt in the Guardians of the Galaxy-transformation worthy.

Nanjiani wrote in the post that since he found he was going to be in the film a year ago, he wanted to go about the transformation. "I would not have been able to do this if I didn't have a full year with the best trainers and nutritionists paid for by the biggest studio in the world," he wrote.

Here's another look at his transformation:

Nanjiani went on to add in the caption that it took a lot of resources and time. He thanked his personal trainers and the people who reminded him it was cool to have a cheat meal every now and then. And, of course, his wife, Emily Gordon.

"The biggest thanks goes to @emilyvgordon for putting up with me complaining and talking about only working out and dieting for the last year," he wrote in his caption. "I promise I'll be interesting again some day."

Marvel's Eternals is set to come out in November of 2020. Until then, if Richard Madden would like to post a similar shirtless photo, we're all for it.

Related Story
Channing Tatum's Daughter Gave Him a Makeover
This content is created and maintained by a third party, and imported onto this page to help users provide their email addresses. You may be able to find more information about this and similar content at piano.io
Advertisement - Continue Reading Below
More From Culture
Author Tahereh Mafi Shares Her Favorite Books
'Virgin River' Season 4: Everything We Know
Advertisement - Continue Reading Below
Could 'Manifest' Come Back for a Fourth Season?
'Bachelor In Paradise' 2021: Everything We Know
Hang On, What's "ROC" at the Olympics?
Obsessed With the Olympics? Read These Books
The 'Friends' Cast Just Dropped Iconic Merch
Twitter Is Obsessed With Greg on 'Bachelorette'
You're About to Hear a Lot About Athing Mu
Meet the Cast of Katie's 'Bachelorette' Season