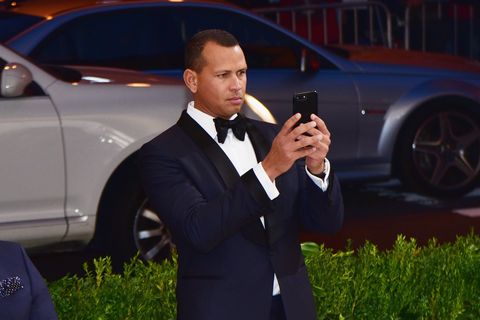 When it comes to celebrity couples, Jennifer Lopez and Alex Rodriguez are, to borrow an oft-overused Instagram hashtag, peak #relationshipgoals. Since confirming their relationship in March 2017 and announcing their engagement two years later, the superstar couple has taken the world and the 'Gram by storm.

Naturally, the famous pair are pros when it comes to posing for the cameras (they're both all-stars in their respective fields!), but it's how ARod has adjusted to play a new position that makes him a true MVP. The former Yankee wants his girl to shine, and if that means he has to put himself on the bench when Lopez goes up to bat (whether that be on the Met Gala steps or the Hustlers red carpet), he'll be supporting on the sidelines every step of the way as the perfect Instagram Boyfriend.

Sure, he may be a rookie when it comes to being behind the camera, but Rodriguez has fully embraced the job, and we're really into it. Here are 12 times ARod was the perfect IG boyfriend to J.Lo.

He knows the right time to snap a picture

It's the behind-the-scenes picture of our dreams as Rodriguez showed up to support his then-new girlfriend on the set of Shades of Blue in Queens, NY, in 2017 and took a silly selfie with her while she was on break.

He wants everyone to get a good picture

Not only is ARod for J.Lo, but he's also for the people! When out shopping in L.A., he took some photos of Lopez shopping and helped fans get a picture-perfect image too.

He knows all of J. Lo's best angles

Lopez is proof (and also Paul Rudd) that the fountain of youth has to be real. As she hit the red carpet to accept her award for the Michael Jackson Video Vanguard Award at the 2018 MTV Video Music Awards, we were all in awe, including ARod.

And he'll fight to get those angles

A truly dedicated Instagram Boyfriend will always use elbows when necessary. At the premiere of Second Act, ARod edged his way in to get the best shot of the actress on the red carpet. Even the crowd was impressed by his effort.

He has the arm reach for the perfect selfie

Yes, sometimes an Instagram Boyfriend has to be in the photo, and if you're going to take a selfie with the queen of Instagram and her hubby (hello, Kim and Kanye! ), you have to have the reach, and Rodriguez definitely got the shot here.

He knows it didn't happen unless you took a photo

ARod understands the most important Instagram Boyfriend rule here: If you didn't take a picture, did it even happen? The duo was spotted posing in between innings at a Yankees home game in 2018.

Forget who's making buckets, when you're asked to take a selfie courtside at a basketball game ARod is up for the challenge without a fight, and we applaud him.

He understands the importance of good lighting

In between speakers at the TIME 100 Gala, Lopez recognized that if good lighting is present, a selfie has to be taken, and it looks like he got the memo too. Ah, couples that selfie together.

He knows how and when to pose

NurPhotoGetty Images
Stars, they’re just like us, which means even ARod and J.Lo pose tourist like in front of the Lourve Museum during a "baecation" and then proceed to eat their weight in bread and cheese...unless that last part is just us?
NurPhotoGetty Images

When we were kids, birthdays were exciting because it was all about the gifts we would be getting. A new bat, dance shoes, maybe a new CD (yes I’m old!). I see firsthand how that’s changed for Jennifer, and how she’s found joy in sharing with others. For someone who has been about giving everything she has 365 days a year—to our children, our families, the world—I hope today, we can give you all the happiness you deserve. I love you mucho Macha 13. ❤️

Nothing lets your followers know how #cuffed you are then the classic birthday post on Instagram. "For someone who has been about giving everything she has 365 days a year—to our children, our families, the world—I hope today, we can give you all the happiness you deserve," he wrote in the caption.

Macha 13, I can’t believe it’s been two years. Only 730 days, which have flown by, but it feels like we have been together forever. We are meant to be, and how much you mean to me cannot be put into words. . From baseball games, to traveling across the world to shows in Vegas. We have done it all together and every moment with you is cherished. Where this road will take us next is unknown but there is no one else I would rather have by my side. The journey is just beginning and I am excited for what’s ahead. . Macha, your hard work is unmatched. Your relentless drive and determination push me to be a better man each and every day. . Like you there is none other. Words will never do justice to what the last two years have meant to me. Thank you for always being you, for your unwavering support and unconditional love.❤️ . Te amo mucho, Lola. . - Macho 13 @jlo

When the couple hit the two-year mark, the ball player took it to IG to let us know how it was to spend the past 730 days with her, and in true IG Boyfriend fashion: it was really sweet.

He knows when to leave it to the professionals

When the couple got engaged in March 2019, it seemed only right to get a professional in to take the photo. From the color of the water to the fact that Lopez's dress flows perfectly in the wind, no wonder the post almost has a million likes.

"Her talent is only matched by her passion to be the best, and I am constantly in awe of her, he wrote in an IG post. The couple celebrated Lopez's accomplishment with Hustlers at the 31st Annual Palm Springs International Film Festival Film Awards Gala.

Not only did he give her praise, but he understood every Instagram post is an opportunity to promote something, and writing "@hustlersmovie" lets us know he's the ultimate Instagram Boyfriend.

Waiting backstage before Jennifer receives the Palm Springs International Film Festival Spotlight Award. . From the moment I first saw @hustlersmovie I knew this was a special role. She crushed it as Ramona and is deserving of every accolade that comes from it. Her talent is only matched by her passion to be the best and I am constantly in awe of her. #Superstar . #CongratsBaby #TeAmo

Related Stories
The Details of J. Lo and A. Rod's Upcoming Wedding
How Jennifer Lopez Gets Her Ageless Glow
Bianca Rodriguez Bianca Rodriguez is the digital fellow at Marie Claire, where she covers all your favorite podcasts, Netflix shows, and celebrities ranging from Rihanna to Harry Styles.
Advertisement - Continue Reading Below
More From Culture
Heart-Pumping Action Movies Coming Out This Year
The Best TV Shows on Hulu Right Now
Advertisement - Continue Reading Below
The Documentaries You Can't Afford to Miss in 2020
'Killing Eve' Season 3 Review: What's Old Is New
A Super Pink Moon is Coming April 7
Pre-Order These Amazing Books Coming Out in 2020
The 8 Best Rom-Coms of 2020
Got 10 Minutes? Here's What to Watch on Quibi
We Could Be Getting More 'Tiger King'
HBO Is Making Iconic Shows & Movies Free to Watch