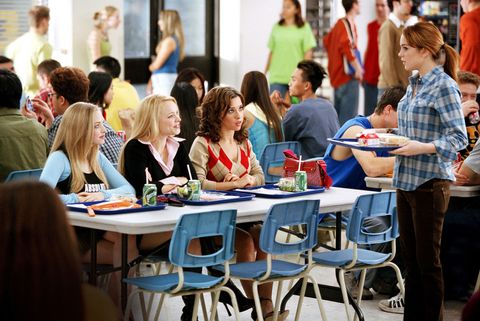 So who bullies more — men or women?

The breakdown is about even. But 70 percent of the time, women target other women, whereas men bully both men and women. And while men and boys who bully are more physical, women and girls use their social antennae; they're indirect and gossipy.

Are women just meaner to one another?

Toddler-age girls push and shove as much as little boys do. But the way women are socialized, aggression becomes less acceptable. The hostility gets sublimated and comes out in excluding others: We are diabolically good at subtle eye rolls and making someone feel very bad in a way that's tough to get called out on.

Your book was inspired, in part, by a work experience of yours. What happened?

I was 29, had just graduated from law school, and found a job with three other recent graduates. Part of the week, I was working remotely, which my boss was totally OK with. But my coworkers started to resent the arrangement. We had to coordinate our summer vacation days with one another, and it blew up into a big fight. One woman complained that I was never there. For the next four months, they shunned me — no one talked to me unless they had to. It grew excruciating; I was constantly on pins and needles and dreaded work. The job was only a year long, so I could leave, but that experience stayed with me and was in the back of my mind as I wrote this book.

Does that qualify as bullying?

If you're ostracized in an environment that you can't escape, it's devastating. Workplaces and schools are captive environments. And if you're being victimized by a supervisor, she has authority over your vacation time, assignments, promotions, and salary.

How has the Internet changed the dynamics of bullying?

You can't go home and get away anymore. We're all connected all the time. One of the first cyber-bullying verdicts was in 2008 against Lori Drew, the Missouri mom who created a MySpace account in the name of a fictitious cute boy and used it to manipulate a 13-year-old girl who eventually committed suicide. It shows the power social media has over our lives. [That verdict was later thrown out by a judge.]

Is the term "bully" overused?

It is having a moment. The term can be constructive, like when Jennifer Livingston, a Wisconsin TV anchor, confronted a viewer last fall for calling her obese. But there's some crying wolf. People have figured out that if you claim bullying, you get all the sympathy. There's even been talk of passing laws to make it possible to claim damages for bullying, but inviting a new class of lawsuits isn't the answer. We have to allow for some abrasive behavior while emphasizing communication and empathy.

What should you do if you're being bullied?

If it's at work, talk to someone you trust outside the office who can give you a reality check. My husband did that for me during my experience after law school. Then, think about who at the office — a supervisor, someone in HR — could help you. Someone who will listen and offer concrete next steps. Among friends, you can take a break. Just get away from a friend who is treating you badly. And as for online, if, for example, your Facebook page is full of ugly comments, don't engage. It can be hard to restrain yourself, but responding will just pull you in further. The bullies can't keep it going if you're not there.