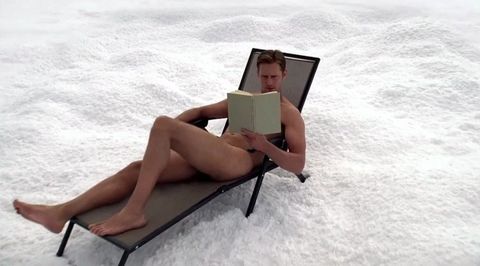 2014 gifted us with an abundance of iconic pop culture moments, including but not limited to Emma Watson's remarkable UN speech, literally everything Miley Cyrus did (hot dogs will never be the same), and Ben Affleck's full-frontal nude scene in Gone Girl. The split-second appearance of Affleck's penis made headlines, was immortalized in GIF form, and was such a huge deal that Jennifer Garner devoted part of her Ellen appearance to discussing it. Somewhat eye-roll-inducing, sure, but it isn't every day that celebrities willingly reveal their genitalia to the world. Actually, make that male celebrities.

Nudity is seamlessly and casually woven into both television and movies, but while film studios are getting more on-board with full-frontal male nudity (Michael Fassbender in Shame, anyone?), viewers are still hard-pressed to find more than a fleeting glimpse of man-parts on cable television. Female nudity dominates networks like HBO, Showtime, FX, and Starz, yet seeing anything below the belt on a man is pretty much a last-unicorn-level rarity.

Seeing anything below the belt on a man is pretty much a last-unicorn-level rarity.

The potential for objectification that comes with female-only nudity is implicit, but shows like Game of Thrones, True Detective, and even Homeland often get away with the grossly imbalanced show of ladybits by arguing that naked women are necessary for their plot lines.

Take a recent bathing scene in Game of Thrones, in which Missandei is trying to enjoy a casual bath in the river (as you do) when her love interest, Grey Worm, sneaks a peek at her assets. The camera casually pans down Missandei's naked breasts and rear, but neither Grey Worm's body nor that of his bathing brosefs are exposed—in fact, they're all wearing pants!

Thankfully the solution isn't buttoning up our collars and nixing naked bodies all together—it's leveling the playing field by pulling a Ben Affleck and embracing full-frontal male nudity with open arms.

In case you were wondering, there's no question that cable networks are allowed to show male genetalia: James Howey rocked his birthday suit during Showtime's Shameless, Chris Meloni was nude in HBO's Oz, and Alexander Skarsgard blessed the world with a full frontal scene during the True Blood Season 6 finale. Plus, let's not forget that GOT's Hodor showed off an enormous prosthetic penis last season, dumbfounding thousands of unsuspecting TV viewers in the process.

Until penises are flying around the screen with as much abandon as breasts, things will feel unfair.

That being said, the number of male actors who have "gone commando" can basically be rounded up in one extremely X-rated—but very small—slideshow, and their nakedness is almost always a newsworthy event of Affleck-like proportions. Though it should be noted that Lena Dunham wanted to show an erect penis on Girls and was shot down by HBO. Nice try?

Natalie Dormer hit the nail on the head when she crusaded for more man-parts on GOT back in November, saying "I suppose it's just the rules of broadcast television, isn't it? I think Thrones has been better than your average show with the equality, but they could definitely ramp it up!"

Amen to that. There's nothing wrong with showing the naked female body on television, but until penises are flying around the screen with as much abandon as breasts, things will always feel a bit unfair. As the saying goes, clear eyes, full hearts, naked men, can't lose.

Women in Comedy: Why Were Your Favorite Female Comedians Snubbed by the Golden Globes?

The 15 Most Iconic TV Wardrobes