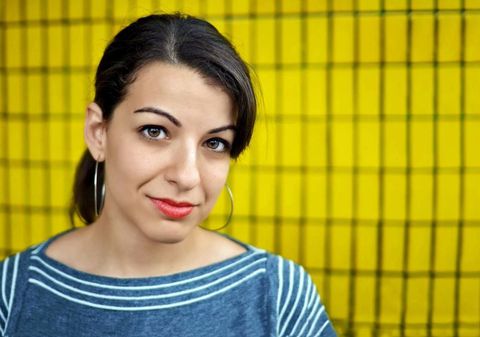 Whoever came up with the nursery rhyme "Sticks and stones may break my bones, but words will never hurt me" couldn't have been a woman speaking up on the Internet. I understand the reality of online harassment all too well. For the past six years, I've hosted and directed a Web series called Feminist Frequency, which features videos analyzing pop culture from a critical feminist perspective. While I wish I could do this without being targeted, I've become very familiar with petty sexist comments and degrading insults from angry viewers, such as, "Go make me a sandwich" or "Why is this ugly whore woman not in the kitchen where she belongs?" (actual comments I've received over the past two years).

In their attempts to silence, humiliate, and discredit women, online harassers also deploy other abusive tactics, like collecting and distributing personal information and home addresses, hacking into e-mail and social media accounts, knocking websites offline for days at a time, and stealing and posting private intimate photos.

It's troll-defining time. Here's a guide to navigating the minefield of internetting while female:

Sealioning is when an uninvited stranger pops into your conversation and peppers you with unsolicited and insincere questions. The sealion politely demands evidence for even the most mundane or self-evident statements and insists that you justify your opinions until he's satisfied—which he never is, since he's asking questions in bad faith. The sealion is basically the self-appointed "good cop" in an interrogation for a crime you didn't commit.

Concern trolling is when harassers pose as fans or supporters with the intention of masking their hostility in pseudo-displays of "constructive criticism." When targeting women, this is most often done through "helpful" suggestions on how to improve one's appearance or adopt a more pleasant tone. The concern troll's disingenuous comments are actually designed to undercut or demean you. Veiled (and sometimes not-so-veiled) accusations of hypocrisy are the bread and butter of this kind of troll.

Gish galloping is a device used to derail a conversation with a flood of falsehoods and tiny arguments that focus on nitpicking or minor unrelated details, each loaded with implied accusations. The gish galloper will often assert the same argument simply rephrased over and over again. Rather than expressing sincere concerns, these petty comments are designed to distract and overwhelm you by wasting your time with tangential or disingenuous arguments that sidetrack the core issues you are discussing.

Impersonation trolling is a strategy whereby harassers create hoax social media impersonation accounts in order to post inflammatory statements in your name. The intention is to try to get as many people as possible to believe the fake quotes and thereby defame you. These fake quotes are then integrated into the other forms of harassment mentioned above.

Dogpiling, the mother lode of online harassment, is when a group collectively works together using dozens of tactics at once to overwhelm a target through sheer volume, clogging and choking online accounts with a cascade of disingenuous questions, insults, slurs, threats, and more. When a large group comes together to try to collectively shame, harass, or discredit a target, it's also called a cyber mob. The goal is to silence, discredit, and humiliate the target by creating an online environment so unbearable that she is driven offline.

Gaslighting, one of the most psychologically damaging types of harassment, is when serial abusers present false information or a false narrative to make you doubt your own memory, perceptions, sanity, or professional knowledge. The harassers are attacking you and simultaneously sending the message that their behavior is not actually abusive. This intentional confusion can lead women to internalize feelings of self-doubt and uncertainty about their own reality.

Gaslighting is the undercurrent traveling throughout online harassment, forcing women to question their own experiences. "[Women are] told that they are not reliable witnesses to their own lives," writes historian Rebecca Solnit, "that truth is not their property, now or ever." When we dare speak up about digital abuse, the response is a cacophony of voices insistently telling us we're making it all up or that it's not really as bad as we think it is. We are told: "Just ignore it," "It's not real," "It's just the Internet," "Toughen up," and "Grow a thicker skin." These flippant sentiments are an aggressive denial of our lived realities, erasing our experiences and suggesting that the abuse inflicted on us is not real and, by extension, our fears and anxieties about it are not real.

But the harassment is real, and if you've experienced it, you aren't alone. We must actively work to create a digital world where we don't ask women to disconnect from their emotional capacity or to jettison their own humanity in order to deal with a constant barrage of threats, slurs, and abuse.

The Dangers of Female Bullies at the Workplace

Kendall Jenner Gets Schooled on How to Handle Bullies