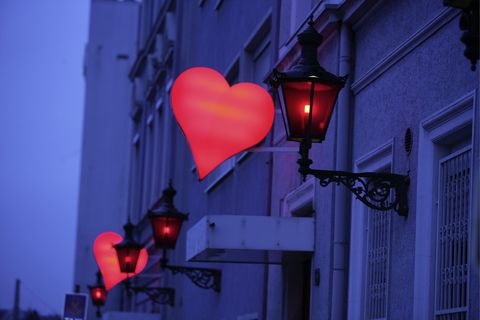 Instead of abstract ideals like life, liberty, and the pursuit of happiness, German Basic Law guarantees the freedom to choose one's occupation. And since 2002, when the German Prostitution Act was introduced, sex work has been classified as one of those occupations. On paper, at least.

The logistics: While the practices of buying and selling sex are legal, things like pimping, advertising, and engaging the services of a trafficking victim are not. And contrary to the belief that legalizing prostitution will invite more human trafficking abuses, the situation in Germany has shown that it actually does the opposite. The number of victims trafficked has dropped, and clients themselves are often the ones to report suspected trafficking to the police. To date, the German sex industry has an estimated worth of 15 billion Euros.

The biggest problem when it comes to prostitution in Germany, in fact, is that it isn't legal enough.

"We have 'restricted areas' where sex work is illegal, which is most small towns and major areas in larger cities," she says. "About 97% of the city of Munich is a restricted area for all kinds of sex work including meeting clients in their homes or hotel rooms."

Despite the stigma, sex workers in Germany function as independent contractors—they earn their money legally, which means they also pay taxes and have access to the same benefits as workers in other industries. Income taxes in Germany are high when compared to the U.S., but the benefits that come accompany them, like unemployment support and subsidized health care costs, are numerous.

There is no reliable data about exactly how many active sex workers there are in the country, since many are short-term and prefer not to reveal their occupation, but it's estimated that there are more per capita than anywhere else on the European continent. And of that nebulous figure, studies estimate that 94% of them are women.

Sex workers in Germany are independent contractors. Which means they earn their money legally.

The data is hard to track, but in 2008 it was estimated that 60% of sex workers in Germany were migrants from less economically stable countries. These women are often young (the legal age for prostitution is 18), don't speak the language, and therefore aren't aware of their access to institutional support. Under the Protection Against Infection Act (IfSG), for example, they can seek anonymous health counselling services. (Though the voluntary and anonymous aspects would disappear if conservative politicians got their way.)

It's larger considerations like this that de Rivière knows are major factors in the stigmas and victimization of sex workers. "The way to make sure a large and diverse group of self-employed people gets treated fairly," she says, "is to give them rights and options and make sure they know about them."

Russian Women Saved from Sex Trafficking in the Nick of Time

This content is created and maintained by a third party, and imported onto this page to help users provide their email addresses. You may be able to find more information about this and similar content at piano.io
Advertisement - Continue Reading Below
More From Culture
The Sexiest New Movies of the Year
A Look Back at Princess Anne's Life in Photos
Advertisement - Continue Reading Below
Where Is the Cast of 'Gilmore Girls' Now?
'The Bachelor' Is Back!
Who Is "Queen" Victoria on 'The Bachelor'?
Matt James' 'Bachelor' Cast: Everything We Know
Get to Know Serena Pitt From 'The Bachelor'
The Best Lesbian Movies Streaming on Netflix
Listen to the Best New Love Songs of 2021 (So Far)
Who Is Christine Chiu on Netflix's 'Bling Empire'?