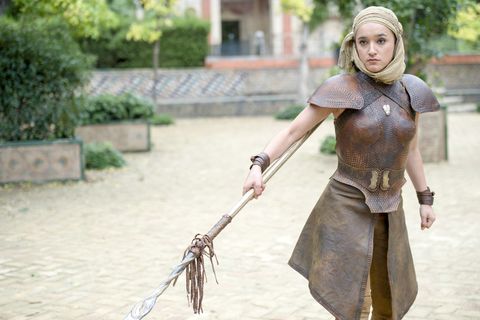 1. Don't be yourself—be a dead person! It's cooler to fabricate every aspect of your life, anyway.

What Happened: The Faceless Woman showed Arya Stark that the Game of Faces is all about creating false identities. Afterwards, Jaqen H'ghar showed Arya his impressive Texas Chainsaw Massacre-y Human Face Collection™, which she'll presumably be tapping into next week.

The Lesson: Step #1: Lie about everything. Step #2: Amass a collection of human faces and wear the hell out of 'em!

2. Find religious zealots who carve neat logos into their foreheads, then get them to unwittingly carry out your master plan.

What Happened: After multiple episodes of plotting, Cersei Lannister got both Ser Loras Tyrell and Queen Margaery Tyrell arrested by the High Sparrow and his henchmen because gay rights are not a thing in Westeros (WTF you guys). And not even the most badass senior citizen in Westeros—Lady Badass of House Tyrell (AKA Olenna Tyrell)—could stop her. And neither could Margaery's husband, the freakin' king, who looked like a scared emoji and did nothing.

The Lesson: Make sure your evil scheme involves crazy people that you can put the blame on. This will toooooootally work out for Cersei.

3. Enlist your warrior daughters to capture a princess in the middle of the day, since stealthy, nighttime abductions are so played out.

What Happened: To avenge her beloved Oberyn Martell's death (oh, and start a war with the Lannisters), Ellaria Sand sent the Sand Snakes to seize Myrcella Lannister in broad daylight.

The Lesson: James Bond who? Forget everything you know about high-stakes, secret missions—carry out your plan in the middle of the day. No one will notice. Except for that guy with an axe.

4. No matter how good the kiss, don't make out with your eyes closed—someone might be trying to kidnap you.

What happened: The soon-to-be-wed Trystane Martell and Myrcella were in the midst of a little make-out sesh when her dad/uncle Jamie Lannister, Bronn, and the Sand Snakes interrupted. A brawl ensued, and Myrcella was captured by the whip-wielding Obara Sand.

The Lesson: It might seem passionate to close your eyes during a kiss, but really, it's just irresponsible. Instead, look out for shady characters/the nearest exit. Avoid abduction at all costs. And thank the dude with the axe for saving you.

5. If the person bathing you is annoying, tell them to hand over the loofah. You don't need their help.

What Happened: While bathing Sansa Stark—and washing out her Manic Panic goth hair dye—Ramsay Bolton's side-piece Myranda told her what Ramsay's ex-girlfriends are up to these days: being dead. Sansa wasn't feeling Myranda's scare tactics, so she sent that kennel girl back to the dogs.

The Lesson: Bathing is an important time to relax and self-reflect—don't let haters get in the way. Especially ones who like to bite lips and hunt aforementioned ex-girlfriends alongside your psycho fiancé. Oh, and please dear god, get the hell outta there, girl.