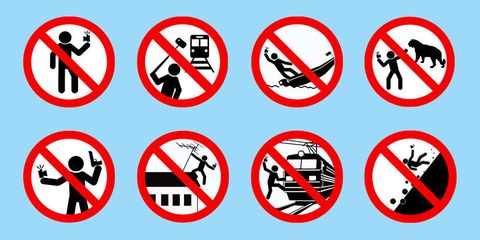 The Russian government has published an official guide on how to take a selfie without endangering your life. As you can see from the helpful photos, some selfie "don'ts" include taking a selfie while holding a gun, climbing an electrical tower, standing in the vicinity of a wild animal, or hanging off of a rooftop antenna.

While it's tempting to laugh at the guidelines (that animal one, though...), the sad truth is that they're not entirely uncalled for. The website of the Ministry of Internal Affairs notes that the pamphlet was made in response to the increasing amount of deaths and injuries that have occurred by people trying to take unique selfies.

"When a person is trying to take a picture of themselves, they become distracted, lose their balance, don't look around and forget that they're in danger," the website reads. And they have a point.

Last summer, a Polish couple fell to their death off the edge of a cliff while on a dream holiday in Portugal due to an attempt to take the perfect selfie. In April 2014, a Russian teenwas electrocuted and also fell to her death while attempting a cool selfie shot on top of a railway bridge. In April 2014, an American woman crashed her car just seconds after she posted a selfie onto Facebook with the caption "The happy song makes me so HAPPY."And those are only a few examples out of dozens of tragic, avoidable incidents.

To quote a popular Russian saying, "It would be funny if it weren't so sad."