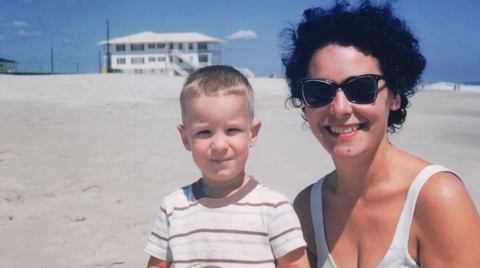 Bill Nye is best known for making science cool and fun growing up. In fact, many consider him their favorite teacher/ultimate science rockstar. And it all makes sense when you learn more about his mother, a woman who seriously broke codes—and barriers—by working in the Navy during WWII.

According to BuzzFeed, Jacqueline Jenkins-Nye worked with Enigma machines, which basically broke code to intercept and decipher German messages during WWII and are credited with shortening the war by a year and a half.

A Kickstarter has been going on to fund a documentary about Nye, and the revelations about his mother have already been filmed. "She wasn't Rosie the Riveter, she was Rosie the Top-Secret Code Breaker," he remembers. "People would ask her what she did during World War II and she'd say, 'I can't talk about it, ha ha ha!'"

In large part because of the influence of his mother, Nye is just as invested in having more women represented in STEM careers—"I would remind us that half of the humans are girls and women, so why don't we have half of the scientists be women?"

Go on Bill, go on. Watch the snippet below and check out the Kickstarter page for more information on how to fund the project.

This content is imported from Third party. You may be able to find the same content in another format, or you may be able to find more information, at their web site.
This content is created and maintained by a third party, and imported onto this page to help users provide their email addresses. You may be able to find more information about this and similar content at piano.io
Advertisement - Continue Reading Below
More From Culture
'The Circle' USA Is Actually Filmed In the U.K.
Pre-Order These Highly-Anticipated 2021 Books
Advertisement - Continue Reading Below
The 25 Most Underrated Films Ever Made
Were the Paintings in 'This Is a Robbery' Found?
'Bridgerton' Season 2: Everything We Know
New True Crime Books You'll Obsess Over
The 'Who Killed Sara?' Cast: Your Complete Guide
The 'Paradise City' Cast Plays Trivia
Sad Movies for When You Need a Good Cry
What Happens When Prince Philip Dies?