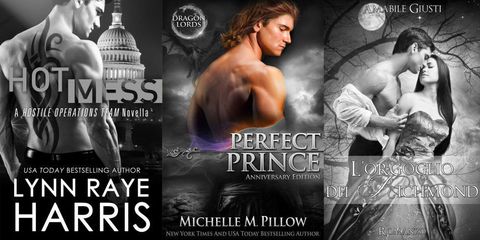 Contrary to what you might think, romance novels with a ripped, hunky man on the cover are *not* a thing of the past. Many men book photo shoots and pray for their images to grace the next bestselling erotica novel—to be the man women everywhere envision as the next Christian Grey or whatever Lothario is the new It guy.

But is it as ridiculous as it seems? Is it a lot of horse riding? Are there a lot of references to Fabio? Inquiring minds need to know, so we talked to Jason Aaron Baca, a California-based romance cover model who has graced 398 covers and counting—yes, seriously—to dive headfirst into this brave new (old) world.

Marie Claire: How did you land your first romance cover gig?

Jason Aaron Baca: It was one of those things I sort of fell into, but that I had a huge desire to do. I'd had no idea how to go about this sort of thing. The business was very fuzzy to me. I honestly just contacted several romance authors asking them what I should do. Before long I got a response from an author that was extremely interested in using me for her next cover, but said I'd have to shoot a specific shot with her cover artist which happened to be close to where I lived. She told me I'd have to shoot in two weeks and I remembered the feeling that came over me—let's just say I became very motivated to get even more in shape.

MC: How old were you when you booked your first cover?

MC: What did you think when you got the job?

JB: Oh, it was an incredible feeling. I remembered being so excited about things that I woke up at like 3 a.m. tensing up my leg muscles and tightening up all over. I couldn't relax! When the day of the shoot came I wanted them to all be in shock—I wanted to walk in and for them to be like, "Now that's what I call a real romance cover model, look at his body! Look at his clear skin and just look at that thick hair!" Yeah... I had that it all envisioned inside my brain...

"They wanted someone ripped, tan, with a look that cuts through anyone with confidence. But at the same time, a look or eyes that say, 'I love you always.'"

MC: Was there anything they told you to help prepare for it? Anything they wanted in particular?

JB: Certainly! They wanted me at my best. I'd previously worked as a fitness model, so they wanted that, but even better. Ripped, tan, with a look that cuts through anyone with confidence. But at the same time, a look or eyes that say, "I love you always."

MC: How many covers have you been on?

JB: As of today, I've been on 398 with about seven more coming down the pipeline.

MC: How many do you typically shoot a month?

MC: Do you make your living off of modeling?

JB: No, I have a day job. It's a desk job—typical work day. I model on the side.

MC: What's different to posing for a romance cover than other modeling jobs?

JB: Quite a bit actually! With other modeling I've done in the past, they would have me do an expression—sometimes "goofy" or "studious" or whatever the case may be. When it comes to romance books, it's all about mystery. Is there someone in the distance that is captivating you? Someone special you are looking at? Romance cover models are the heroes; the main event. So they have to be confident most if not all of the time. They're often, kind of, expressionless in a way.

"When it comes to romance books, it's all about mystery. Is there someone in the distance that is captivating you? Someone special you are looking out at?"

MC: Do you get references to Fabio a lot?

JB: Yeah. When people think of certain things in this world, certain people come to mind. Like when someone thinks of bodybuilding, the first person that comes to mind might be Arnold Schwarzenegger—same thing applies here. Fabio's kind of like the person that invented romance cover modeling and set the foundation...he was excellent for the business, I might also add.

MC: How do you prepare for a shoot?

JB: Well, the night before a shoot is always weird. All that work, all that exercise, all those days to prepare—it all comes down to that next day. I tend to picture it all unfolding in my head. The day of the shoot, prep wise, I shower using an exfoliating gel scrub. I like using Nivea for Men 3-in-1 Body Wash and Neutrogena's Invigorating Face Wash, those are my favorites.

MC: How long do the shoots last?

JB: Shoots often take between 2 to 5 hours. Most will depend on if they have a set sequence of shots and poses they have lined up, as well as wardrobe.

MC: Do you make good money with these shoots?

MC: What are the craziest props you've ever had to work with? A horse? Angel's wings?!

JB: Well, the good news about living in this day in age is they can edit a lot of stuff in—so you bring up the angel wings, and they've used them before on me—only I wasn't wearing any. The graphic artists do that. But I have been in some pretty unique costumes! I've been a caveman and a Viking guy...those were really cool. I almost wanted to just, like, walk through a mall looking like that. [laughs]

MC: What's been your craziest/funniest moment on set?

JB: There's been a bunch. A funny (or sad) one was when, once, we did a full shoot. It went great, everything was a wrap, people were shaking hands saying goodbye. Then suddenly the photographer yells, "Wait! I forgot to put in the memory chip!" All was a waste and we had to shoot over.

MC: Do you ever read the books you're featured on?

MC: How much retouching goes into these covers?

JB: Some have a lot and some very little...I will say most have a lot these days. It's mostly for stuff like angel's wings, though...

MC: What's been the craziest "art direction" comment that you've gotten when posing? Something like, "Grip her harder; look more smoldering!"

JB: [laughs] Nothing really like that. The craziest art direction I'd ever received was when they asked me to hold a co-model in my arms and just continue to hold that pose without making any crazy faces.

MC: Have you ever been recognized?

JB:I have, actually. But most of the time, they can't figure out what they recognize me from. [laughs]

Samantha Leal Senior Web Editor I'm Sam, the senior editor at MarieClaire.com.
This content is created and maintained by a third party, and imported onto this page to help users provide their email addresses. You may be able to find more information about this and similar content at piano.io
Advertisement - Continue Reading Below
More From Culture
Fans Are Ready for Second Season of 'Bling Empire'
What We Know About Part 2 of 'Lupin'
Advertisement - Continue Reading Below
You *Need* to Follow the 'Bling Empire' Cast on IG
Watch the Trailer for the New 'Euphoria' Special
We've Getting a Season 2 of 'Bridgerton'
New Drama Movies That Promise to Move You
The Sexiest New Movies of the Year
A Look Back at Princess Anne's Life in Photos
Where Is the Cast of 'Gilmore Girls' Now?
'The Bachelor' Is Back!