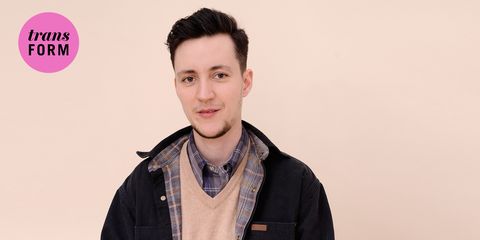 There has arguably never been more awareness of transgender issues in the U.S. than now, when trans people of all shapes and sizes are having a clear "moment" in pop culture. As a producer and consultant on the critically-acclaimed and cult-favorite series Transparent, Rhys Ernst—who transitioned at 25—is right at the heart of the trans media wave.

Aside from his work on the Golden Globe-winning show, he has also directed and produced a series of Emmy-nominated shorts about the trans and gender-non-conforming community, This Is Me, and is now writing a movie.

For the final story in MarieClaire.com's trans(form) series, we spoke to the filmmaker about how pop culture influenced his adolescence, the problem with "transplaining," and how this is just the beginning of a much larger movement.

Marie Claire: You're in the entertainment industry, which is where so much of the mainstream trans movement seems to be playing out. Why is pop culture so vital to trans progress?

Rhys Ernst: I grew up in the '90s, and media was a really big part of my becoming aware of queer culture in general. I have this memory of being 13 and watching The Real World: San Francisco and seeing Pedro Zamora and that being the first time I ever saw gay people kissing on TV. It affected me in an intense way. It was before I knew I was queer at all, and my way of grappling with those feelings early on was through watching MTV. The power of media has really affected me personally.

Ellen DeGeneres coming out made me feel really insecure and strange in a way that I couldn't really articulate at the time. Once I came out as queer, the new queer cinema movement—things like director Todd Haynes, the Killer Films production company, and Pedro Almodovar films—those became ways I could imagine a future I hadn't otherwise seen represented growing up in North Carolina in the '90s.

MC: How has that landscape shifted, now that we live in this post-Caitlyn Jenner world?

RE: Trans kids are living in the future in a way. When I was growing up, "transgender" wasn't even a word. It wasn't used. Just the naming of something that's invisible, or was thought of as shameful or different—giving it a name that's not a slur is powerful. It's still a little hard to imagine what it might look like growing older as a trans man, but I think that's going to change for the next generation. For trans kids growing up, that visual bridge towards their future selves is starting to develop in conjunction with this trans media wave we're in. There's an acknowledgement that this world exists, that this type of lifestyle exists, and that this type of people exist. We can thrive, have challenges, or everything in between.

MC: You're a producer and consultant on Transparent, and it's awesome that there was so much care taken to make sure the story was authentic. But what do you say to people who ask why a trans actor wasn't chosen for the role?

RE: Most of the time it's unnecessary for a cisgender actor to play a transgender role, but there are some exceptions. Look at Hillary Swank in Boys Don't Cry. I'm not mad at that. It's all about context and intention, and how thorough the production was in their investment. Did they include trans people at any point? Was it a queer perspective? Is it advancing the trans movement? If you can answer those questions in a positive light, the casting becomes less consequential.

MC: Working on Transparent this season and knowing how much the show has shaped the scope of the trans pop culture movement, is there a social obligation in mind? Do you think, "We have America's ear, this is the message we need to send?"

RE: We really wanted to skip the 101 and go straight to the 201 and 301, and let the audience catch up. I don't see season 2 as a linear progression to the next topic that needs to be addressed out of obligation. There will be a lot of firsts in season 2, and we're taking it to a more complicated conversation about gender and history.

MC: There's so much media attention on the trans community right now, but what are some issues or experiences we aren't hearing about that need coverage?

RE: I think it's really important to champion stories from trans women and trans women of color. That demographic has gone unheard and unsupported for so, so long, and it's really the community that's struck the hardest by a lot of issues—particularly trans women of color. I try to do a lot of work to champion trans feminine issues and stories, but that said, I do have a personal and deep investment in seeing trans masculine stories reflected in culture. It is a little disappointing to me that trans men and trans masculine people have not really been part of this media movement that we're experiencing right now.

MC: Why aren't they?

RE: I think it's important for trans men not to take up tons of space and to learn how to be feminist, but it's also important for trans masculine people to feel like they have a voice. These issues don't have to be at odds. Within the trans community, there's a bit of pressure for trans masculine people to take the back seat. That's a double-edged sword. It's good to take up less space as a man in society, but when you're socialized as a female for most of your life, patriarchy kind of cuts in both directions. It's a little simplistic to say trans men are privileged because they're men. I was socialized female and I transitioned at 25, so I experienced a hell of a lot of gender discrimination in a lot of directions growing up.

RE: The bro thing is interesting, and no one really talks about it. From my experience, not being socialized male and being plunged into the male world is a very strange experience. I don't feel like I will ever be an alpha male. I couldn't do it if I tried. I don't know how successful I am at hitting all the marks and excelling as a male in society. That's not something I feel like I have access to. It's misleading to have an expectation that if you are read as male you have all the privileges therein. Bro culture is really intense and really hierarchical. Like, are you a man's man? Are you gonna measure up to the other men here? I don't know how to fucking do that.

It is a little disappointing to me that trans men and trans masculine people have not really been part of this media movement that we're experiencing right now.

MC: Transparent's audience has grown over time, but were you concerned about appearing to viewers who aren't necessarily socially liberal and aware of LGBT issues?

RE: I don't think we really think about that. When you lead with story instead of education, then it becomes absorbed emotionally and intuitively so you don't really have to explain things. I don't think people respond as well to being transplained.

MC: How do you hope to see trans characters represented in the future?

MC: How much does physical appearance have to do with a transition? There was a certain amount of backlash against the coverage of Caitlyn Jenner's beauty routine. Is the media doing it wrong?

RE: It's an incredible double standard that happens toward women in general. In terms of the trans community, there's another layer: passing privilege and the cultural expectation of medically transitioning. The medical healthcare Caitlyn Jenner has had access to is very unusual for a trans person. In terms of the media, I would love to see more representation of gender nonconforming people, genderqueer people, or people who don't choose to medically transition. Nobody's gender is completely straightforward. We all have a very unique gender experience.