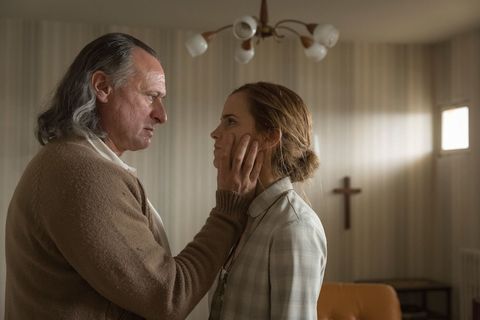 Update, 1/26: Uh, how far in advance can you preorder movie tickets? Asking for me, because Emma Watson's got a new movie coming out, and it looks like the sort of historical thriller a girl could *really* get into.

The international trailer for Colonia probably blew your mind—if not, keep scrolling and give it another go—so now, we proudly bring you two exclusive pieces of new information to add to the buildup: A) the release date (April 15) and B) the official poster, in which Lena bravely knocks on the door of the secret Nazi-cult compound where her boyfriend's being held and probably having unspeakable things done to him. All together now: "And I can't even get a text back."

Original story, 9/16: Like Liam Neeson with cuter outfits and a less keen interest in electrocution (I think), Emma Watson's Lena puts herself in harm's way/voluntarily joins a secret Nazi cult/runs in heels a lot to rescue a loved one from a less-than-ideal situation.

In Colonia, set during the Chilean military coup of 1973, Lena finds her mission when Pinochet's secret police abduct "her man" (barf) and remove him to an isolated torture center disguised as a village where all the inhabitants wear Bavarian costumes and the décor can best be described as "maximum-security prison." A creepy preacher dude also lives there; you get the feeling he is responsible for all the human-rights abuses they show onscreen and more.

So do they make it out or not? The movie is based on true events, so the spoilers are right there in the history books.