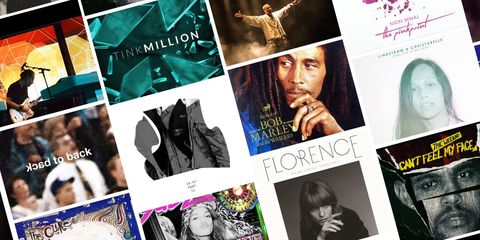 Whether we were reciting every lyric or aggressively  Shazaming, this season's runways provided an endless stream of must-download tracks. To ensure your iPod isn't missing out on the music that kept the models in motion, subscribe and listen to our Spring 2016 Spotify playlist below as we break down our top ten favorites.

1. "F*ck the Summer Up" by Leikeli47 at Alexander Wang

Of course Alexander Wang already has the elusive, up-and-coming rapper on his radar. The designer's soundtracks are always bouncy and powerful, but Leikeli47's pulsating jam was befitting for his robust 10th anniversary celebration. Not to mention, the track got Jay Z's seal approval, as he featured it on Tidal's summer playlist.

We've had this wild island anthem on repeat ever since Minaj performed it on the VMAs and considering that DVF is the ultimate woman of the world, we think the rapper's lyrical hook was a perfect sentiment: "American girls run the planet, South African, European, Asian, Australian and my Canadian girls."

3. "Could You Be Loved" by Bob Marley at Tommy Hilfiger

The set of Hilfiger's show recreated famous Caribbean watering hole Basil's Bar and naturally looked to the ultimate island life anthem from the greatest reggae artist of all time, Mr. Marley. Feel good grooves vibed throughout the venue as Rasta-inspired  wares splashed down the runway.

Showgoers may have had to reconfigure their fashion week schedules to accommodate his last-minute show, but West made it up to them by giving them a first listen on his new track. Boasting auto tune-enhanced vocals, a vintage Motown sample, and bass-heavy instrumentals, it was decidedly befitting  of his subversive show.

5. "Just Like Heaven" by The Cure at Tory Burch

Burch's spring collection was, in a lyric, just like a heaven. The Cure's dreamy '80s love song was inspired by the band's girlfriends (and recorded on a vineyard in the South of France, BTW) and Tory's girls, decked in airy, Moroccan-inspired designs, seemed to channel that swoon-worthy feminine spirit.

6. "Music in My Mind" by Lindstrøm and Christabelle at Victoria Beckham

Because Beckham has impeccable taste, and we'd trust our iPod in the hands of any former Spice Girl, we always look forward to her soundtrack. This space disco collab between the Norwegian producer and cooing chanteuse is bold, chic, and fluid—just like Victoria.

7. "Villain" by Thom Yorke at Rag and Bone

Radiohead singer Yorke has collaborated with the British brand on more than one occasion, but this time around he debuted a stunning eight-minute long number recorded with 12 members of the Brooklyn Youth Chorus. His sonic signatures are unmistakeable in the spooky ballad and it was a perfectly-cool complement to the military-inspired collection.

8. "Back To Back" by Drake at Serena Williams for HSN

Tennis fans might blame Drake for William's gut-wrenching U.S. Open upset, but it's clear things between them are just peachy. The rapper was not only perched front row at her show, but his freestyle, Meek Mill diss track "Back to Back," soundtracked the runway. The fiery lyrics and robust beats serve as a reminder this rumored pair has no time for haters.

9. "How Big, How Blue, How Beautiful" by Florence + The Machine at Michael Kors

The tile track off of one of our favorite albums of summer, Florence Welch's vocals soar over brass riffs that are simply breathtaking. Evoking an ethereal mood, Kors' girls—Kendall Jenner among them—glided down the runway in their stem-showcasing carwash skirts.

If there's one thing we love, it's a slow jam on the runway and R&B songstress Tink's cover of Aaliyah's 1996 hit "One in a Million," was the perfect re-imagination for Carly Cushnie and Michelle Ochs' hip-hop-inspired catwalk. Produced by Timberland, who worked on the original, it features the later singer's vocals on the hook accompanied by the newcomer's infectious rhymes and croons.