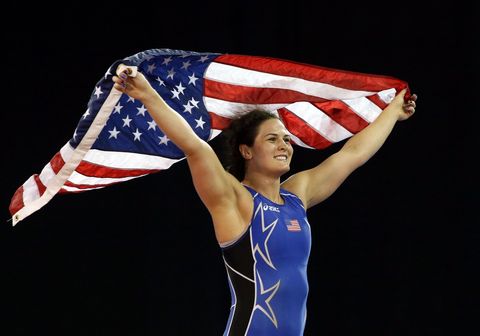 "I was ecstatic to be honored along side these amazing female athletes," said Gray, after learning about being a finalist. "As an athlete in the oldest sport known to man it is great to be recognized as a champion. For the United States Olympic Community to recognize the hard work that has allowed me to bring Women's Wrestling to the world is exciting."

Jorgenson echoed those same sentiments: "When I was told I was nominated for the Female Olympic Athlete of the Year I immediately thought of my team of Jamie, Patrick, training partners, and sponsors have helped me so much throughout the years. Then when I saw who the other nominees were I was a bit shocked! I am among some very deserving candidates."

As we continue to highlight women's achievements in sports, it's important to note that we have a long way to go—especially when it comes to equal pay. But hopefully, as more women are recognized, things will change. Right, ladies?

Below find the full list of Best of the Year finalists for 2014 - 2015. Don't forget to vote for your favorites—which will count as 50 percent of the tally—at TeamUSA.org/Awards.

Adeline Gray, Wrestling: Won her third world title at 75 kg., to rank second among U.S. women in world championship gold (3) and overall (5) medals, while maintaining a No. 1 world ranking throughout the season.

Katie Ledecky, Swimming: Became the first swimmer to win the 200-, 400-, 800- and 1,500-meter freestyle events at the FINA World Championships, claiming five gold medals and three world records to be named Female Swimmer of the Meet in 2015.

Male Olympic Athlete of the Year

Jordan Burroughs, Wrestling: Went undefeated to claim his third world championship title in the men's freestyle 74 kg. division in 2015, becoming the third-most winningest wrestler in U.S. history and improving his record to 114-2 overall.

Ashton Eaton, Track and Field: Improved his decathlon world record with 9,045 points and broke a 40-year-old world decathlon record in the 400-meter to win the gold medal at the 2015 IAAF World Championships by more than 300 points.

Vincent Hancock, Shooting: Became the third male to win three world championship titles in skeet shooting, and the first to post a perfect world-record score of 157 straight targets since the new skeet rules were implemented after the 2012 Olympics.

Olympic Team of the Year, presented by Dow

Male Paralympic Athlete of the Year

Mike Shea, Snowboarding: Won the LL2 banked slalom world title and three world cup events to end the season ranked No. 1 in the world for both banked slalom and snowboardcross.

Andy Soule, Nordic Skiing: Won the most medals ever (5) by a U.S. athlete at the Nordic skiing world championships and added five world cup medals to win the overall cross-country world cup title.

Roderick Townsend, Track and Field: In his first year of Paralympic competition, won four world championship medals, winning gold in the high jump and twice setting the world record in his signature event.

Paralympic Team of the Year, presented by Dow

U.S. National Team, Sled Hockey: Went undefeated during the 2014-15 season and defeated Canada, 3-0, to win the 2015 world championship, outscoring its five opponents by a combined 29-1 in the tournament.

U.S. Women's National Team, Wheelchair Basketball: Won the gold medal at the 2015 Parapan Am Games, defeating the reigning world champions and all opponents by an average of 55 points per game to qualify for the Rio 2016 Paralympics.